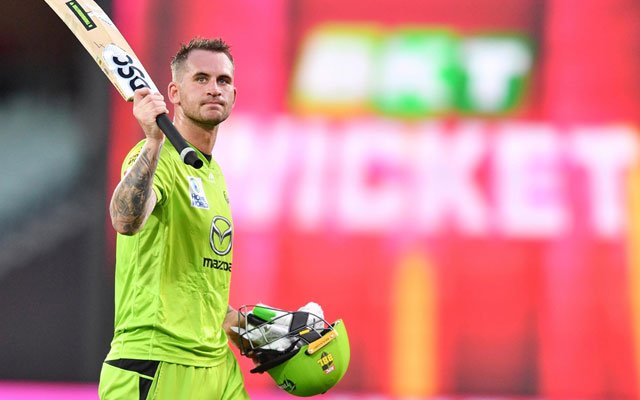 Alex Hales, the right-handed batsman from England was once again ignored from the squad to be played against Pakistan in ODI’s at home. As many as 9 uncapped players were selected, with Ben Stokes leading the side has put Hales comeback on the cloud again.

Prominent top-order batsman, who was in red hot form in T20 Blast and Big Bash League, continues to be on the sidelines from the English squad. Hales, started his ODI career way back in 2014 aggregating 2419 runs from 67 innings at an average of 38 and a healthy strike rate of 96. He also has 14 half-centuries, 6 tons and highest score of 171 to his name.

Hales was dropped from England squad due to failure of two tests for recreational drugs in 2019 and has not been able to make a come back to the national squad since.

Alex Hales in England T20 Blast since dropped from national side

Alex Hales, who plays for Nottinghamshire in England T20 Blast has amassed just over 1000 runs from 34 innings at an average of 33 and a terrific strike rate of 156 in the last 3 years since his dropping from the England squad. He accounts for 7 half-centuries and a century with 101 being the highest score during this period.

His increasing strike rate and decreasing balls per boundary [balls per four or a six] since 2019 shows how dangerous a player he is at the top of the order.

Alex Hales in Big Bash League since dropped from national side

Hales, who plays for Sydney Thunder in Big Bash League has scored 1119 runs from 32 innings at an average of 39 and a good strike rate of 154 in the last 3 seasons of his BBL stint. He has got 9 half-centuries and a century with 110 being the highest score during this period.

His prolific Strike rate and decent balls per boundary since 2019 indicates how dangerous a player he is to be ignored from any squad.

Considering England’s recent years’ approach of going hard from ball one in shorter formats of the game, Alex Hales has got an excellent strike rate and a very less number of balls to hit a boundary. So, it is very unfortunate for Hales to be continuously ignored by the selectors.

Even though it’s difficult for him to get into the current England team’s playing XI, but can definitely be a backup player in the squad.