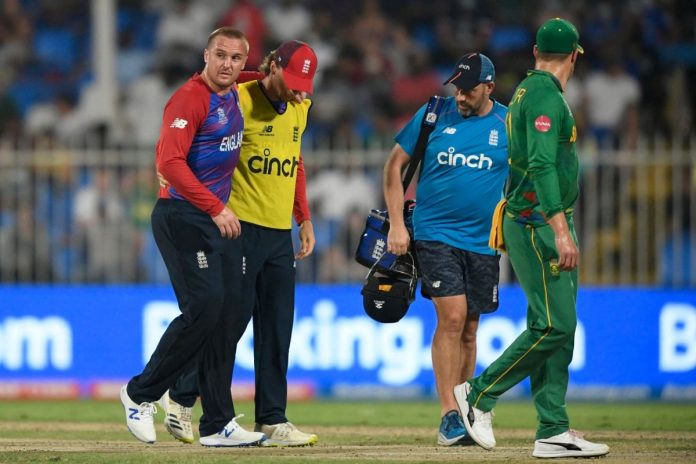 England opener Jason Roy, who suffered a calf injury against South Africa, has been ruled out of the remainder of the ICC T20 World Cup 2021. Eoin Morgan & Co has roped in James Vince, who is touring as a travelling reserves, as his replacement.

Incidentally, Roy pulled his calf muscle while taking a single during their Super 12 defeat against the Proteas. He immediately dropped to the ground and looked in extreme pain before he limped off the ground on his teammates shoulder. After the game, Jason Roy was seen hobbling on a crutch on the boundary edge after South Africa completed a ten-run win.

England captain Eoin Morgan feared the worst after Roy went down and now the dashing opener has been ruled out of the tournament. However, Jason Roy will remain with the squad to support his teammates.

“I’m gutted to be ruled out of the World Cup. It is a bitter pill to swallow. I will be staying on to support the boys, and hopefully, we can go all the way and lift that trophy. It has been an unbelievable journey so far, and we have to continue expressing ourselves and concentrating on us,” Jason Roy said.

The 31-year-old is hopeful that he will be up and running ahead of England T20I series against West Indies next year.

“The rehab has already started, and even though I’ve torn my calf, I’m going to give myself the best chance of being ready for the T20 tour of the Caribbean at the start of next year,” Jason Roy concluded.

Meanwhile, James Vince will replace injured Jason Roy for the remaining games. He has 12 T20I matches under his belt and will hope to make his presence felt if an opportunity comes up.

England will lock horns with New Zealand in the semifinal on November 10 (Wednesday).