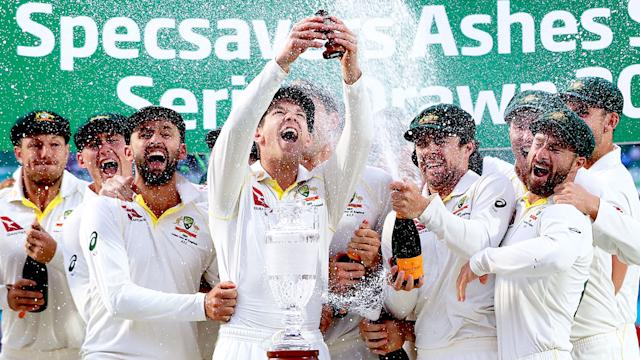 Australia have recalled veteran batsman Usman Khawaja as they announced a 15-member squad for the upcoming Ashes series. The southpaw, who last played in 2019, has been in spectacular form in the Sheffield Shield competition this year scoring at an average of over 60.

Khawaja will now fight out with Travis Head for a place in the middle-order that already has the likes of Steve Smith, Marnus Labuschagne, and Cameron Green. On the other hand, Marcus Harris has been picked as David Warner‘s opening partner.

“Marcus has been a consistent run scorer domestically and had a strong winter further developing his game with Leicestershire. He is a good player who will be looking to build a strong partnership with David Warner at the top of the order,” George Bailey said.

“Travis finished last summer strongly, second only to Cameron Green for runs scored, and has again started the season well. He drives the game forward and can put the opposition under pressure with his ability to score quickly. Similarly, Usman Khawaja has been in great touch. He brings a calm, consistent and experienced component to the batting line up and is a proven run scorer at Test level. He also has the ability to bat across a range of positions in the batting order,” he added.

The selectors have also named uncapped legspinner Mitchell Swepson as Nathan Lyon’s backup. Michael Neser, who has just returned to training after suffering a mild hamstring strain, has been picked alongside Jhye Richardson as the backup for the pace trio of Pat Cummins, Mitchell Starc and Josh Hazlewood.

“Jhye is seeing the rewards of concentrating on his red ball cricket in the build up to this series,” Bailey said. “We know he has an exceptional skill set and are excited about what he brings to the team now his body is back on track,” he added.