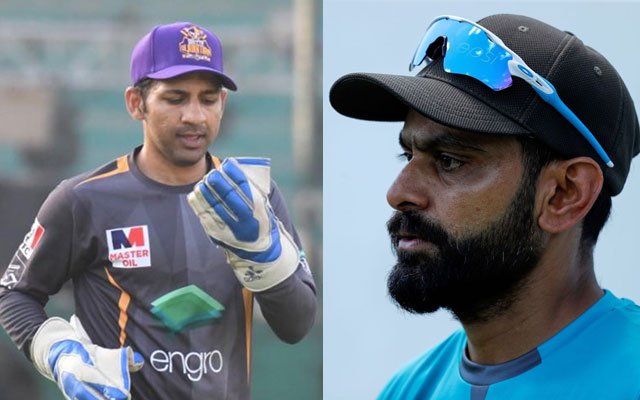 Players often engage in a heated debate on the Twitter platform. The rivalry may extend or continue even on the field. But, that wasn’t the case between former Pakistan captain Sarfaraz Ahmed and Mohammad Hafeez. Although they had a verbal spat on the micro-blogging Twitter platform, it is good to know that they didn’t hold grudge against each other.

Both the stalwarts sorted the issue on the pitch recently. Now, both are on good terms with each other. We all know that there was an infamous exchange of words between the two Pakistan players on Twitter. Their verbal spat became the talking point on Twitter as it caught the attention of the cricket fraternity.

It all began when Mohammad Hafeez heaped praise on Mohammad Rizwan for being a top wicketkeeper-batsman. He took to Twitter and congratulate Rizwan by posting a tweet. “Congratulations @iMRizwanPak on scoring T20 Hundred points symbol Clapping hands sign Thumbs up . U r a Star shining star Glowing star Wonder how long u need to prove that u r NO1 wicketkeeper/Batsman in pakistan in all formats of the game. Just asking.”

Hafeez’s tweet caught the attention of Sarfaraz Ahmed and the latter decided to post two tweets. “Hafeez bhai Sb, whoever has played for Pakistan from Imtiaz Ahmed, Wasim Bari, Tasleem Arif to Saleem Yousuf and from Moin Khan, Rashid Latif to Kamran Akmal and even Rizwan right now has always been number ONE for the country and have been respected accordingly.

“We are all behind Rizwan and wish that he plays many more amazing innings for our beloved country. We expect nothing but positiveness coming from an international player who has played so many games for Pakistan,” he further tweeted. In reply, Hafeez wrote: “Shallow minded approach EXPOSED!”

Meanwhile, plenty of fans thought that these two players wouldn’t talk to each other. However, things were sorted out pretty quickly and the former Pakistan captain Sarfaraz Ahmed displayed a heartwarming gesture to Mohammad Hafeez. It all happened during the game between Quetta Gladiators and Lahore Qalandars when Lahore registered a comfortable win.

After the game, Hafeez led the way alongside Fakhar Zaman as they secured a 9-wicket victory. It was when Sarfaraz Ahmed decided to let Hafeez lead his team off the pitch. This literally goes to show that these two players don’t hold any sign of grudge against each other. Moreover, this was a sign of mutual respect between these two players.