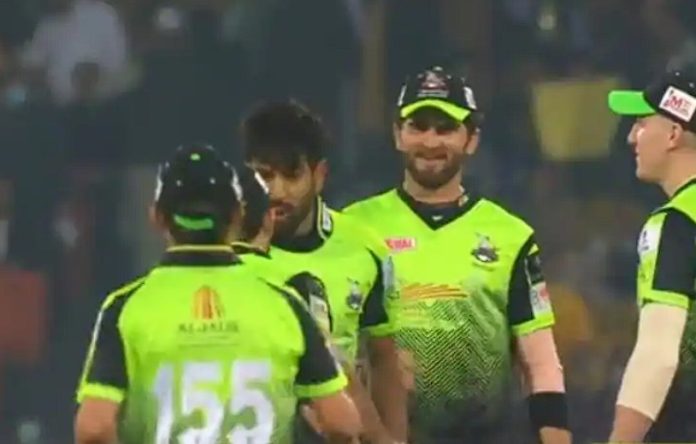 The ongoing edition of the Pakistan Super League has continued to entertain the onlookers in many different ways. Meanwhile, the 30th game of PSL 2022 between Lahore Qalandars and Peshawar Zalmi witnessed an unexpected moment during the passage of play.

Lahore Qalandars’ bowler Haris Rauf made the headlines after he was seen slapping his teammate. The incident was caught right after taking his wicket at Gaddafi Stadium in Lahore. In fact, this particular incident became the talking point on social media.

Haris Rauf had slapped his teammate Kamran Ghulam after taking the wicket of Mohammad Haris during the game. The incident took everyone by surprise including Kamran Ghulam. However, the player didn’t take it seriously as he was seen smiling.

Haris Rauf vent his frustration by slapping his teammate Kamran Ghulam after the latter dropped a regulation catch during the game. Earlier in the game, Kamran Ghulam dropped Peshawar Zalmi’s opening batter Hazratullah Zazai. The opener tried to hit Haris’ full delivery away on the leg side during the second over.

During the penultimate ball of the same over itself, Fawad Ahmed took a sensational catch to get rid of Mohammad Haris. While Kamran Ghulam went up to the pacer Haris Rauf to congratulate him, the fast bowler was in no mood to celebrate with him as he slapped him in frustration.

Needless to say, it seemed it was a friendly slap as Kamran Ghulam took it lightly. He was also seen smiling. During the later stage of the game, when Ghulam inflicted a run-out, Haris Rauf was caught on camera hugging Ghulam.

Parents saying we love you and showing affection after they beat the shit out of you.
Haris Rauf To Kamran Ghulam pic.twitter.com/YCj7TopMZ5