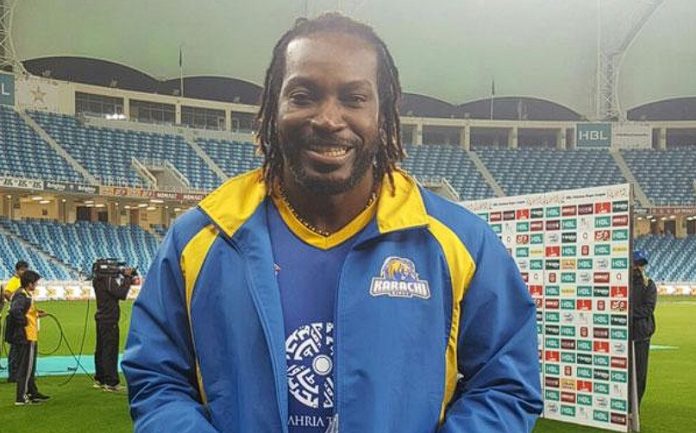 Karachi Kings have been the worst-performing team in the ongoing season of the Pakistan Super League. Under the leadership of Babar Azam, Karachi Kings hardly made an impact on the field. They played 10 games so far in the competition where they secured just one win in this season.

Karachi Kings suffered enough humiliation already as they lost as many as nine games. Meanwhile, West Indies legendary cricketer Chris Gayle made the headlines after he forcefully announced to become the next coach of the Karachi Kings franchise.

The 42-year-old has taken a break from international cricket. He didn’t take part in the five-match T20I series against England which West Indies won the series by 3-2. Gayle was also not part of the limited-overs series against India. The Caribbeans felt the heat while locking horns with India in the ODI and T20I series.

The Universe Boss who has posted several hilarious tweets on Twitter posted another tweet in a sarcastic way. In his tweet, he announced that he will be the new head coach of Karachi Kings. He also highlighted that there is literally no argument about his decision.

Chris Gayle’s tweet went viral across social media platforms. His tweet came after Karachi Kings failed to turn up the ante in the Pakistan Super Kings. “Hey, @thePSLt20 – I will be the new head coach next season for @KarachiKingsARY. There’s no argument in this one! #UniverseBoss 😊😉,” Gayle tweeted.

Hey @thePSLt20 – I will be the new head coach next season for @KarachiKingsARY.
There’s no argument in this one! #UniverseBoss 😊😉

“Congratulations to Karachi for winning a match. It was a good pitch, we aimed 170-180 and we fell short of it. We wanted to pick early wickets and we managed to do it. Our bowlers bowled to the plan, I rotated the bowlers as I didn’t want their batters to settle against a particular bowler. Yorkers are important in the T20s, especially in the death. Our bowlers executed them and mixed it up nicely,” Babar Azam said after the game.