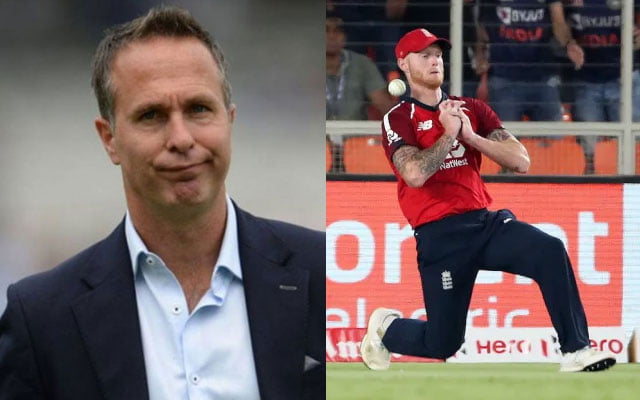 The former England captain, Michael Vaughan continuing with his incessant disdainful comments, once again took to Twitter with his witty remarks towards the Indian Cricket Team. Vaughan has been on a spree with his tweets against the Indian Cricket Team ever since the start of England’s tour to India. But he was always outdone by yet another Twitter Master, Wasim Jaffer, who responded to his ill tweets in the best way possible. The fans have been enjoying this friendly banter taking place off the field.

This time around, Michael Vaughan was trying to get cheeky with the standards of the Indian Team’s fielding. He shared a tweet highlighting India’s poor fielding show in the ongoing T20I series against England.

But this time it was the fans who filled in the shoes of Wasim Jaffer and gave a befitting reply to him. Although, what was the humorous side of the banter was the inclusion of England’s All-Rounder, Ben Stokes. The fans were quick enough to notice the bizarre fielding efforts by one of the best fielding English bloke, who dropped Ishan Kishan at a crucial juncture of the game in the 2nd T20I match.

What’s in store for the fans in the remaining matches of the T20I Series?
After an emphatic win for the men in blue, the series stands in parity with 1-1 each. The third match will be played on 16th March and will be an important match from the perspective of both the teams as this will decide, which way the series is tilting towards.

While England trumped India in the first T20I, the Indians were quick enough to return the favours to their nemesis in the 2nd T20I.

Positives for India: With Virat Kohli back amongst run, is surely a boost to the team. Also, a new revelation in the form of Ishan Kishan will pose a dilemma in front of the management to select the best 2 openers from the pool of many.

KL Rahul, the world’s number 2 T20I batsman is yet to make his presence felt after scoring 1 and 0 in the two T20I matches so far. Should Rohit Sharma be replaced back into the squad is the next million-dollar question.

Whereas from England’s perspective, they will be looking to fix a few holes which the Indians exposed in the 2nd T20I Match. Apart from Jofra Archer and Sam Curran, every other bowler took some belting from the Indian batsmen. Apart from Jason Roy, none of the other batsmen could get going. This is one other area which will make the England camp worry a bit.