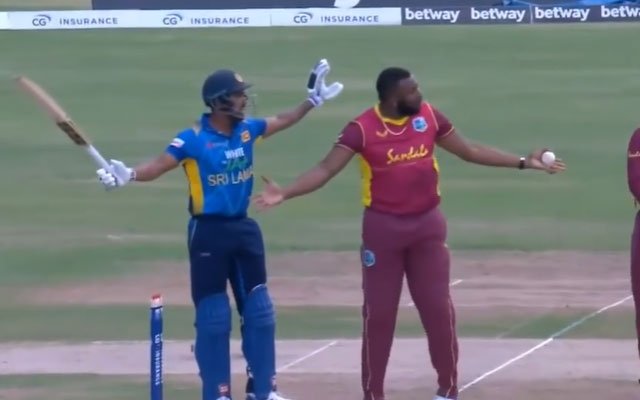 Sri Lanka are still finding it extremely hard to hit the kind of levels they used to dominate when the likes of Kumar Sangakkara, Mahela Jayawardene, Chaminda Vaas, Muttiah Muralitharan and Tillakaratne Dilshan donned the jersey. Ever since their retirement from international cricket, Sri Lanka are not the same as before.

Although they have been tried really well, winning a game seems quite a hectic task. After getting whitewashed at the hands of South Africa and Sri Lanka in the Test series, the Lankans took the flight to Antigua to lock horns with West Indies in a full-fledged tour.

Initially, both the teams battled it out at each other in the three-match T20I series. West Indies started the home assignment with a win over the visitors. After a long time, Sri Lanka managed to secure a victory, which is quite a positive sign. They also gave everything in the series decider but West Indies pulled off the ropes from the jaws of defeat.

After winning the T20I series by 2-1, West Indies took on the Lankan side in the first ODI of the three-match ODI series. Sri Lanka batted first and got off to an imperious start with the help of skipper Dimuth Karunaratne and Danushka Gunathilaka. The opening pair laid out a perfect platform as they constructed a 105-run stand.

West Indies captain Kieron Pollard got rid of the Sri Lankan captain as the latter was caught and bowled by the former. He departed after scoring 52. Just a couple of overs later, Gunathilaka was sent off, in what was a controversial incident.

During the 22nd over, Gunathilaka defended the ball and looked for a single. While he came to know that West Indies fielders came close to collecting the ball, Gunathilaka immediately sent his partner back. In doing so, the batsman tried to drag the ball back towards himself while he tried to get back to the striker’s end.

Kieron Pollard and others made an appeal to the umpire complaining that they couldn’t pick up the ball while Gunathilaka got back to the crease. The on-field umpire made a big decision by signalling “out”.