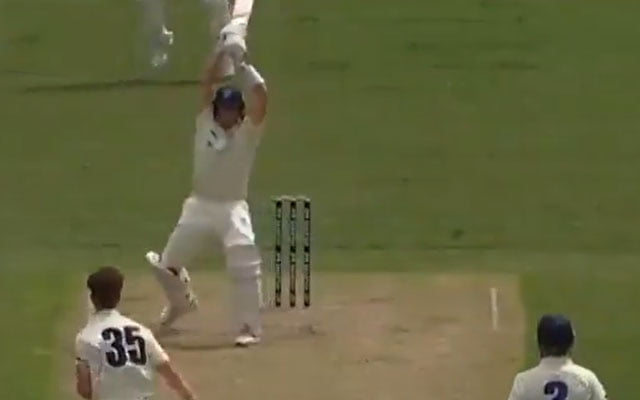 Australia’s best batsman Steve Smith hogged the limelight recently during the Border Gavaskar Trophy Test series against India when he was involved in a controversial on-field incident on Day 5 of the SCG Test match. The right-handed batsman was caught on stump camera apparently tampering with the crease during the drinks break and thus he received criticism from all quarters on social media for the same.

However, captain Tim Paine defended Smith’s actions by adding that he was just shadow batting at the crease. Meanwhile, another video of Steve Smith is doing the rounds on social media this time around. The video surfaced from the ongoing Sheffield Shield tournament witnessed some good moments during the passage of play.

During the game, Smith held his bat and reacted hilariously which took the cricket fraternity by surprise. His batting stances and post-delivery movement drew everyone’s attention as the fans took to their respective social media handles to chip in with their own opinions.

Meanwhile, Australia’s popular social media handle posted the video on their Twitter platform along with a hilarious caption that reads: “Never change, Steve Smith along with two laughing emojis.” Smith who is known for his quirky batting stance not only took the fans by surprise but including the opposition team players as well.

Despite the fact that the top batsman managed to score only 7 runs, he caught the attention of the fans with his crazy moves after each and every delivery. Meanwhile, Smith set his base price at INR 2 crore as he was released by Rajasthan Royals ahead of the mini-IPL auction scheduled to be held in Chennai on February 18.