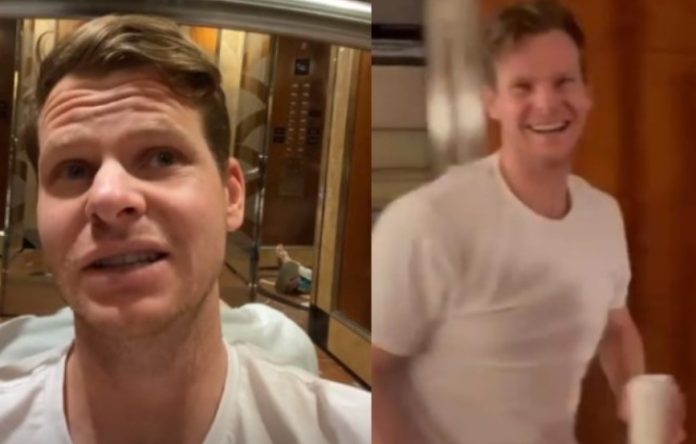 As far as cricketers are concerned, life is full of uncertainties on and off the field. They are always under pressure when they don’t perform as they get easily targeted by the fans. History tells us that some fans hurl abuses while others do something morally wrong.

They just cross their limits by sending death threats to the cricketers who fail to live up to their reputation. However, when it comes to the uncertainties part for cricketers, it is not always about the fans but regarding other things as well.

Case in point, Australia‘s best batsman Steve Smith ran through one of the worst experiences of his life after he got stuck in the hotel lift. Well, it wouldn’t have been a headline had he got stuck inside for 5 or 10 minutes.

However, this is entirely a different one altogether. Steve Smith got stuck in the hotel lift so much that he had to wait for nearly an hour. Yes, you read it right! The unfortunate incident took place at the Park Hyatt in Melbourne.

Steve Smith did exactly what others would do if they were in that situation. Yes, he took his phone and then posted live updates on his Instagram story from the lift in the first place. Meanwhile, Smith’s teammate Marnus Labuschagne came to know about it.

He tried his best to open the lift’s door but all his efforts were to no avail. Talking about the situation, Steve Smith was heard saying, “I’m on my floor, I’m staying on this level but the doors won’t open. Out of service up there apparently.

I’ve tried to get the door open; I’ve got this side open, Marnus (Labuschagne) is on the other side trying to open that to not much avail. Not quite the evening I had planned, let’s be honest.”

“Left waiting for more official help than Labuschagne could provide. Well, I am just taking a seat. What else do you do when you’re stuck in a lift? I could be here for a while. Anyone got any suggestions for what I can do?”

However, after some time, Steve Smith breathed a sigh of relief after a man showed up and eventually opened the lift’s door. “Well, I’m just taking a seat. What else do you do when you’re stuck in a lift? I could be here for a while. Anyone got any suggestions for what I can do?” Smith added earlier.