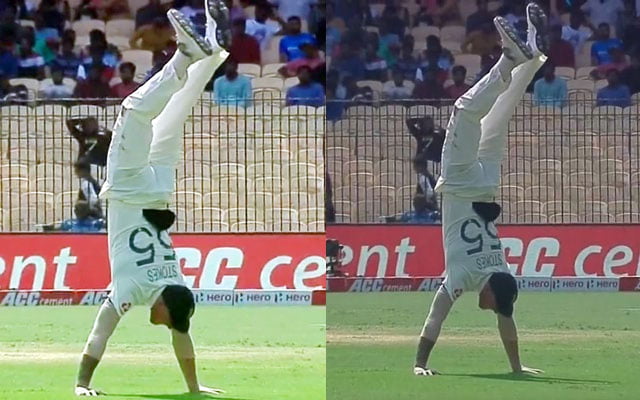 England all-rounder Ben Stokes is currently involved in the second Test match against India at Chepauk Stadium in Chennai. He made an all-round contribution in the first Test match where he scored a vital 82 in the first innings. His innings was laced with 10 fours and 3 sixes. He took the big wicket of Indian captain Virat Kohli in the second innings.

Stokes also made his presence count on the turf as he took 2 catches as well. Talking about his performance in the second Test, he hardly upped his ante as he managed to score just 18 runs in the first innings. As many as 5 players fell prey to Ravichandran Ashwin’s bowling and Ben Stokes was one of them.

The veteran off-spinner stunned Ben Stokes by bowling a gem of a delivery. Stokes was beaten and the ball went on to make a mess of his stumps. Stokes also went wicketless in the first innings. He bowled 2 overs and gave away 16 runs. However, the all-rounder did not bowl in the second innings.

There is no hiding from the fact that Stokes is an absolute entertainer. Apart from reacting to situations, he is also known for his on-field antics. In the first Test against India, when Rohit Sharma dropped a dolly, Stokes gave an amazing reaction as he kept his hand on his mouth.

In the same Test match, Jasprit Bumrah hit the first ball for a boundary, Stokes who was positioned at slip, reacted to the shot by clapping. While the England all-rounder failed to deliver the amends, he ensured to entertain Chennai crowd on Day 3 of the ongoing Test.

Stokes took the cricket fraternity by surprise performing the handstand on Monday. The incident happened right after lunch session when the cricketers were walking out on the field. Stokes initially walked up to the slip cordon and pulled off a risky stunt as he received a massive round of applause from Chennai fans.