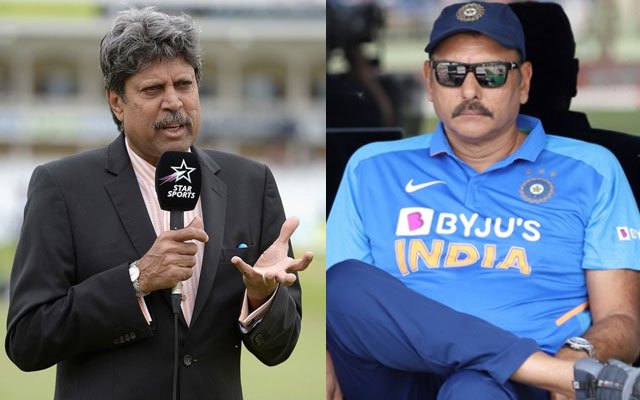 India’s head coach Ravi Shastri’s tenure will be coming to an end after the T20 World Cup in the United Arab Emirates. During Ravi Shastri’s tutelage, India haven’t won any ICC event. Team India reached the finals of the ICC Champions Trophy 2017 but lost to Pakistan in the crucial battle.

The Men in Blue reached the semifinals of the ICC ODI World Cup 2019 but lost to New Zealand. Then again, Virat Kohli & Co had a perfect opportunity to win the ICC trophy when they reached the finals of the inaugural edition of the ICC World Test Championship final.

Unfortunately, Team India failed to make use of their chances on the reserve day. Despite rains spoiling the fun for more than 2 days, the Kiwis still managed to produce a result. They won the game by 8 wickets at The Rose Bowl in Southampton.

India’s trophy drought continues once again. The Men in Blue last won a major ICC trophy back in 2013 under the leadership of MS Dhoni when India beat England in the Champions Trophy. Since then, it has been an array of disappointments.

After India lost to New Zealand in the ICC WTC Final, the majority of the fans wanted a change in the Indian team. They wanted Kohli and Shastri to resign from captaincy and coaching roles. Meanwhile, former India’s World Cup winning captain Kapil Dev chipped in with his opinion on the India coach debate.

The legendary captain reckons there is absolutely no reason to remove Ravi Shastri as head coach of the Indian team. Speaking on the show ‘Wah Cricket’ on ABP news, Kapil Dev said: If you’re trying to shape a new coach, there’s nothing wrong with it. Then again, if Ravi Shastri continues to do a good job, there’s no reason to remove him either. Only time will tell. Before that, I think it will put unnecessary pressure on our coaches and players.”

Kapil Dev also feels there is nothing wrong with youngsters getting an opportunity. “India have big bench strength. If players get the opportunity and India can assemble two teams that can claim to win in both England and Sri Lanka, there is nothing better.

If the youngsters get the opportunity, there’s nothing wrong with it. But if it is up to the team management to decide whether they should apply such pressure on two teams simultaneously,” Kapil Dev concluded.