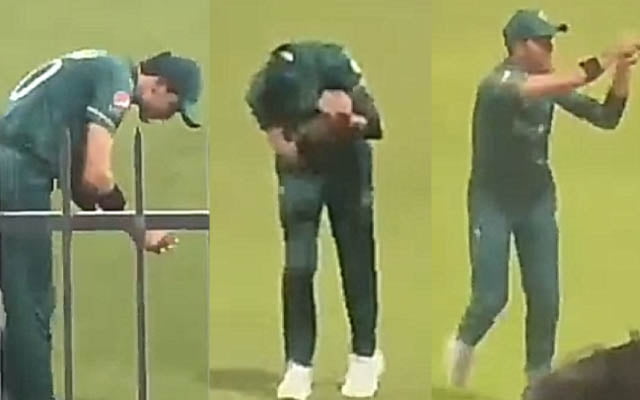 Pakistan pacer Shaheen Afridi was at his brutal best as the men in greens thrashed arch-rivals India by 10 wickets in a ICC T20 World Cup group fixture on October 24.

With figures of 3/31 from his four overs, Shaheen Afridi laid the foundations for what would be Pakistan’s first ever win over India in a World Cup match. The left-arm pacer dismissed India’s opening duo Rohit Sharma and KL Rahul and India captain Virat Kohli later in India’s innings.

A couple of weeks have passed by since that one-sided affair but the memories are still fresh. In a viral that has gone video now, Shaheen Afridi can be seen enacting the dismissals of Rohit Sharma, KL Rahul and Virat Kohli.

In the video, fans can be heard chanting the name of Rohit Sharma, to which Shaheen Afridi responds by performing how the dismissal panned out. Similarly, the young fast bowler also enacted the dismissals of KL Rahul and Virat Kohli.

The video has received mixed reactions from fans. While some were seen praising Shaheen Afridi for engaging with the crowd while other called the gesture as disrespectful.

Pakistan to play Australia in the semifinal

Babar Azam & Co, who are yet to lose a game in the ICC T20 World Cup 2021, will lock horns with Australia for a final berth in Dubai. Mohammad Rizwan and Shoaib Malik were diagnosed with flu and missed the training on the eve of the game; however, has been cleared to play against the Aussies.

Pakistan, who has been in devastating form in the competition, will hope to continue the superlative form and make it to the finals for the first time since 2009.

The illustrious final of of ICC T20 World Cup is scheduled to take place on November 14 at the Dubai International Cricket Stadium.