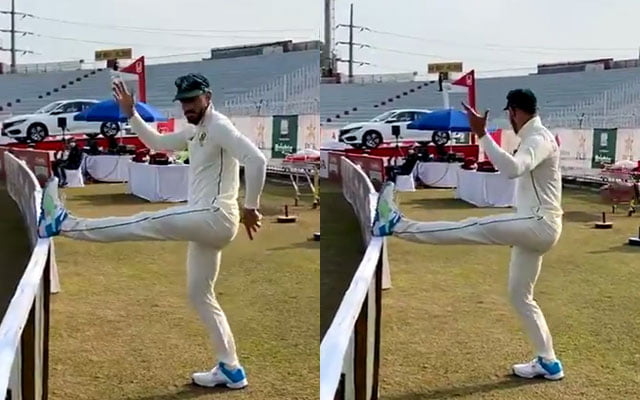 South Africa were in really good form as far as the Test format is concerned. They recently inflicted a 2-0 whitewash on Sri Lanka at home. After flying high on confidence, they travelled to Pakistan to play 2 Tests and 3 T20Is. However, they could not weave the magic in the first Test match against the hosts at National Stadium in Karachi.

Pakistan were in complete command more often than not. Thus, it was too easy for them to set the trap in right areas and with tricks, trade and tactics, they comfortably defeated the tourists by 7 wickets and took the first lead in the two-match Test series. Meanwhile, Proteas are currently involved in the second Test match against Pakistan in Rawalpindi.

The word ‘entertainment’ in cricket doesn’t necessarily mean one must hit gigantic sixes or take wickets or catches during the gameplay. It can be decoded in other ways as well. Former South Africa captain Faf du Plessis entertained the cricket fraternity by showing off his quirky dance moves as he danced to a Bollywood song. The video went viral on social media.

Coming to the point, fans expected the visitors to respond straightaway in the second Test following the first Test debacle. Much to everyone’s expectations, they did provide a stellar comeback by taking three quick wickets. The likes of Keshav Maharaj and Anrich Nortje ran riot as they dismissed Imran Butt, Abid Ali and Azhar Ali.

While these batsmen departed for cheap scores, captain Babar Azam and Fawad Alam played a superb brand of cricket and restored normalcy in the Pakistan batting unit. The duo took the game away from the visitors by adding 123-run partnership. Babar scored 77 off 125 deliveries with the help of 12 fours to his credit.

Fawad Alam who was named the man of the match for his 109 in the first Test also continued his rich vein of form in the second Test. Fawad scored 42 including 5 fours. At the end of Day 1, Pakistan scored 145/3 in 58 overs. They still have plenty of work to do to add runs in the first innings.