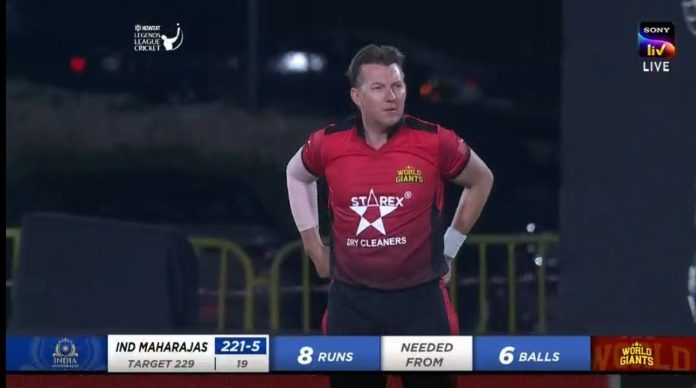 Former Australia cricketer Brett Lee rolled back in time in the ongoing inaugural edition of the Legends League Cricket in Oman. The celebrated fast bowler defended eight runs in the final over to hand World Giants a crucial victory.

The high-profile encounter lived upto its expectations as it went down to the wire in pursuit of 229 runs set by the World Giants. Batting first, last match’s hero Kevin Pietersen got out cheaply but the Giants recuperated well to get the things going.

Phil Mustard and Herschelle Gibbs added 98 runs for the second wicket before Ireland all-rounder Kevin O’Brien took the game away with a blistering 14-ball 34 runs innings. Gibbs chipped in with 46-ball 87, including seven sixes and boundaries each while Mustard contributed 55 runs aided by five boundaries and four sixes.

With an asking rate of almost 11.5 runs per over, India Maharajas were reduced to 29/2 in 3.5 overs with Wasim Jaffer and Subramaniam Badrinath back in the hut. Naman Ojha, who has already notched a century in the competition, once again steered the Maharajas innings alongside Yusuf Pathan.

Ojha and Pathan added 103 runs before Albie Morkel provided World Giants a much-needed breakthrough. The dismissal of Pathan led to another wicket with Stuart Binny also following the suit. Irfan Pathan and Naman Ojha almost took the Maharajas home with eight needed off the last over before Brett Lee pulled off an emphatic win.

Irfan Pathan, having smashed the fastest fifty of the tournament off 18 balls, was on strike and clearly India were the favourites to seal the deal. Brett Lee started the over with a wide before striking back with a wicket the most dangerous batsman.

The 45-year-old Brett Lee gave away only three runs in the over to help World Cup Giants secure a five-run victory. Lee finished with figures of 22/1 in three overs.

@BrettLee_58 just defended 7 runs from 6 balls in @llct20.
Binga doing what he used to do⚡#LegendsLeagueCricket pic.twitter.com/qxxnv0Ogi0