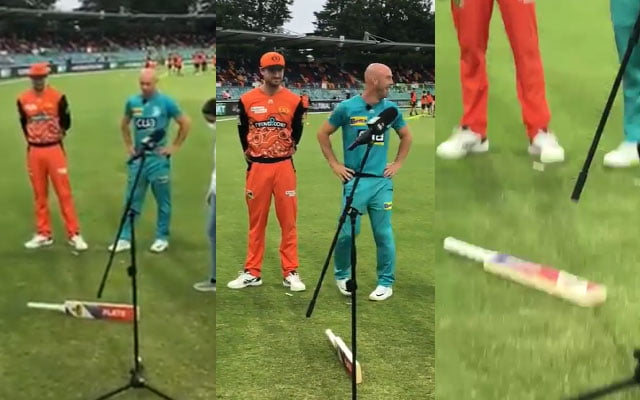 On Thursday, Perth Scorchers and Brisbane Heat crossed swords with each other in the Challenger match at Manuka Oval in Canberra. Earlier, Sydney Sixers became the first team in the ongoing season of the Big Bash League to have qualified for the BBL 10 final. The winner of the Challenger will face Sydney Sixers on February 6 at Sydney Cricket Ground.

Ahead of the Challenger between the two powerhouses, an interesting drama took place at the toss time. The ever-so-popular bat-flip is the most-talked-about moment in the Australian franchise cricket. This is quite different when compared to other matches that usually have a coin to determine the winner of the toss.

Bat flipped thrice to determine the winner of the toss

Since the coin has two sides, it is quite easy for us to say whether it is heads or tails. It’s quite simple. However, when it comes to bat-flip, it is a tad complicated and the result may not be delivered in the first place. The reason is that when the bat stands on the edge, it can give neutral results.

Ahead of the Challenger match, the bat failed to give us clear result in the first two attempts. However, it was only in the third attempt that the bat flip went for Brisbane Heat captain Chris Lynn who won the toss and elected to bat first. Even KFC Big Bash League official Twitter handle couldn’t keep calm as they posted the video along with the caption which reads – “Unprecedented scenes here at the bat-flip”.

In reply, the match was reduced to 18 overs due to unexpected rain but still, Brisbane Heat lacked the teeth to ace the run-chase. They lost the game by 49 runs on the DLS method. Joe Burns was the only batsman who scored 38 off 24 balls including 3 fours and 1 six. Heat batsmen fell into the trap of Scorchers’ bowlers.

Aaron Hardie took 3 wickets, Fawad Ahmed, Andrew Tye and Jason Behrendorff took 2 wickets each. Liam Livingstone was named the man of the match for his fantastic batting display in a crucial match.