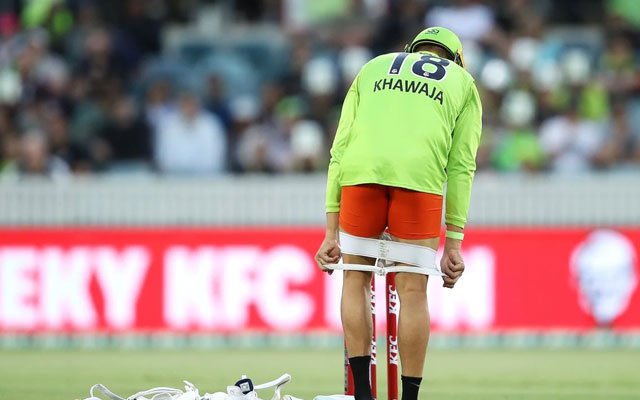 The BBL knockout match between Brisbane Heat and Sydney Thunder witnessed a bizarre incident during the passage of play. Sydney Thunder opening batsman Usman Khawaja stunned the whole cricket fraternity by removing his trousers only to change his abdomen guard in the middle of the pitch.

The entire incident left the commentators, fans and viewers in splits. The video clip of the incident went viral all over the internet. Well, what made Khawaja change his abdomen? The left-handed batsman felt discomfort with his abdomen guard where he experienced a hitch and hence he decided to change it immediately.

While everyone expected him to quickly rush to the dressing room and get himself ready for the next ball, Khawaja decided to change everything on the pitch itself. The incident took place just after the 8th over of Sydney Thunder’s batting. Instead of going to the dressing room to change stuff, the southpaw decided to solve the matter on the ground without wasting any time.

Meanwhile, 7Cricket social media handle posted the video clip along with a caption. “Have … have you ever seen this before😂Usman Khawaja had to change everything – on the field!” One of the commentators during the game said: “I’ve watched as you two have 35-40 years worth of cricket, I’ve never seen a cricketer completely disrobe on the ground.”

“Pads, shoes, trousers– Sydney Thunder opener removed one gear off after another as commentators said during the game.”What’s going on?” Khawaja didn’t last on the pitch for a long time as he departed after making just 28 runs off 30 balls (4 fours).

While Thunder were struggling to score runs on the board, Ben Cutting chipped in with vital contribution in the fag end of the overs. He scored 34 off 18 balls including 1 four and 4 sixes. Thunder set a target of 159. In reply, Brisbane Heat chased down the total with 5 balls to spare. Sam Heazlett was named the player of the match for his 74 off 49 balls (6 fours, 3 sixes).