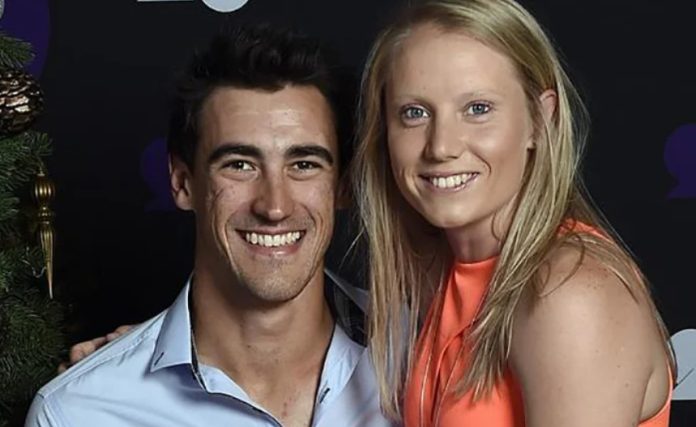 Not long ago, Australia’s men cricket team retained the Ashes by beating England by 4-0. Australia won the first three games in a row, in what was an utter demolition and humiliation to the England cricket team. England managed to draw the fourth Test.

However, Aussies raised their levels in the fifth and final Test and secured their fourth win of the series. Meanwhile, the women’s Ashes Test between Australian women and England women took place at Manuka Oval, Canberra.

Both teams locked horns with each other in a solitary Test match. Batting first, Australian women posted 337/9 and then declared the innings. Meg Lanning top-scored with 93 including 13 fours whereas Haynes and Gardner scored 86 and 56 respectively.

The cricket couple were spotted sharing adorable moments together during Day 3 when the match was abandoned due to rain. The video begins with Starc and Healy having a candid chat with each other in the dressing room during the break. After that, they were also spotted eating a doughnut as they both split it and shared it.

Katherine Brunt took a fifer to her name for England. However, England Women were all out for 297. Skipper Heather Knight scored 168 including 17 fours and a six. Australian Women declared the innings after scoring 216/7.

Katherine Brunt once again turned up the screws for England with the ball as she took 3 wickets. England Women managed to survive the pressure. They ended up posting 245/9 before the fourth and final day came to a close as both teams shared points. Heather Knight was named the player of the match.