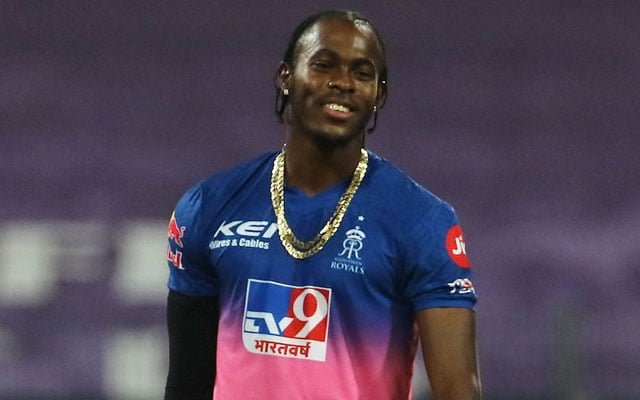 England pacer Jofra Archer sent shockwaves to Rajasthan Royals’ supporters after confirming that he has been ruled out of the Indian Premier League. The Barbados-born pacer will undergo surgery on his right hand on Monday. The right-arm quick played in 2 Tests and 5 T20Is against India before returning home a few days ago at the end of the truncated version of the game.

He took 4 wickets in 2 Tests and 7 wickets in 5 T20Is. England Cricket Board, in a statement, confirmed that their ace pacer will undergo surgery on his right hand and after which, he will undergo a scan and subsequent Consultant review. The 25-year-old fast bowler also had an injection for the right elbow injury.

He was also declared unfit for the team selection for the ODI series against India. Meanwhile, the surgery on Jofra Archer’s hand will happen on Monday. He can recover during the planned break after his elbow injection. It is said that the right-arm quick encountered a cut to his hand while cleaning at his home in January shortly before travelling to India to prepare for the Test series.

As per England’s medical team, undergoing surgery is the best option to manage his injury in long run. The 25-year-old fast bower has by far represented England national cricket team in 42 games across formats wherein he has taken as many as 86 wickets to his name. As far as his IPL career is concerned, he played 35 games and took 46 wickets to his name.

His absence is a big blow to Rajasthan Royals because he is someone who can take crucial wickets and also score runs. He was the leading wicket-taker for the franchise in the 2020 season at the United Arab Emirates. The young pacer took as many as 20 wickets in 14 games where he registered his best bowling figures of 3/19.

He also maintained a pretty decent economy rate of 6.55, which is well and truly commendable. Besides that, he scored 113 runs at a staggering strike-rate of 179.39. In this article, we will take a glimpse at the five bowlers who can replace Jofra Archer at Rajasthan Royals in the 14th edition of the Indian Premier League.

Australian international Jason Behrendorff is one of the possible replacements that the Rajasthan Royals could look to fill the void. The lanky pacer is known for his ability to trouble both the right and left-handed batsmen with exceptional bowling.

Moreover, he can also get an additional bounce off the pitch and can access the conditions very well. The left-arm quick played a substantial role in the 2020-21 edition of the Big Bash League (BBL). Plying his trade for Perth Scorchers, the Australian international bagged as many as 16 wickets.

The 30-year-old doesn’t have enough experience in the lucrative Indian Premier League. He played only 5 games in the IPL where he accounted for 5 dismissals. Meanwhile, Rajasthan Royals already have Andrew Tye, Jaydev Unadkat, Chris Morris, and Mustafizur Rahman in their arsenal.