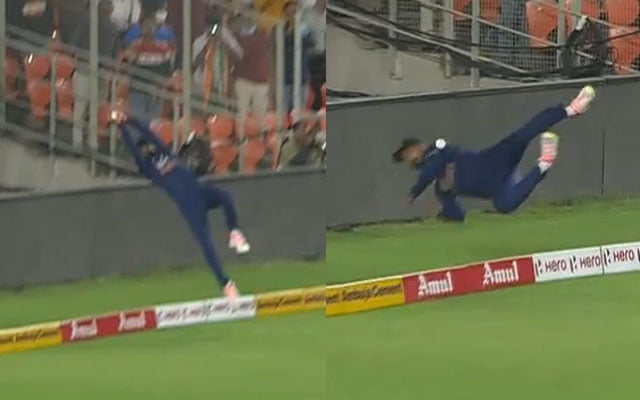 KL Rahul’s breath-taking effort at the boundary line was yet another demonstration of the fitness peaks, these modern gen players have thumbed. Axar Patel was hit by Jos Buttler early in the innings for a certain maximum over the ropes when KL Rahul’s acrobatic efforts at the long-off boundary region pulled the ball back into play.

Even the great, Jonty Rhodes would have been awe-struck by that effort. Although KL Rahul could not dent the English bowlers with his bat, there was no lack of commitment by the wicket-keeper batsman. He fell to Jofra Archer’s full delivery outside-off which he went chasing and dragged onto his stumps. He scored only a solitary run.

The toss once again spun away from Kohli and Morgan asked the Men in Blue to bat first. India had a rather unpleasant start with the top 3 back in the hut for cheap. It was then the Delhi Capital’s duo, Rishabh Pant and Shreyas Iyer, who tried to stitch up a partnership to bring some momentum into the game. But just when Pant looked that he was getting into his groove, he was caught in the deep off Ben Stokes.

Although the Delhi Capital’s captain, Iyer held the fortress from one end but lacked support from the other end. In the end, India could post only a modicum of 124 runs which was never going to be a daunting task for the heavy batting line-up of England.

England comfortably tracked down the total with 8 wickets in hand and more than 4 overs still left to play. Jason Roy missed out his fifty by 1 run but by the time he was deported back to the dug-out, England was too far ahead of the game.

Well, India has bounced back hard after a drubbing loss in the first contest of the past 2 series, namely- Test Series against Australia and, England and the same will be expected in the 2nd T20I as well.