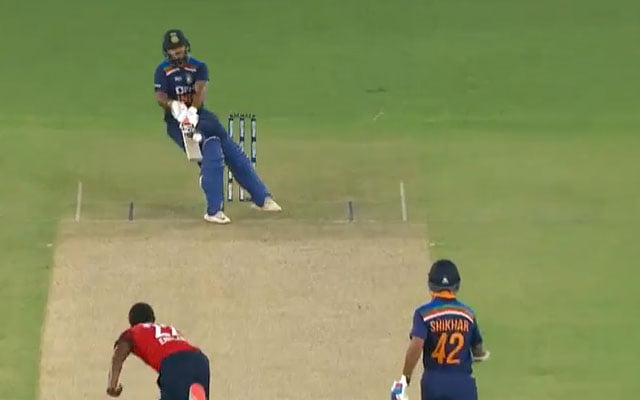 India’s young wicketkeeper-batsman Rishabh Pant has slowly established himself as one of the stylish and innovative batsmen in modern-day cricket. It doesn’t matter whichever format he plays, he just makes sure he sticks to his gameplay. Even during the Test series against Australia and England, Pant batted really well at an exceptional strike-rate.

Pant brought the best version of himself in the Test series where he chipped in with scores of 97, 89* in the third and fourth Test against Australia at the SCG and The Gabba. His knocks came at a time when India settled for a draw and won the series decider at Australia’s fortress. He was named the man of the match for his heroics in the 4th Test.

India won the Test series by 2-1 and secured a second consecutive Test series win in Australia. Pant continued his sleek flow of form in the home Test series against England where he scored 91, 58* and 101 in the first, second and fourth Test respectively. Let’s not forget that all these were super-fast knocks.

The highlight of his innings came when he hit an outrageous reverse sweep shot off England’s veteran pacer James Anderson’s bowling. Commentators, fans and everyone were in awe of the spectacular shot as it went viral on the internet.

Similarly, he executed the same type of shot off England pacer Jofra Archer’s bowling in the first T20I against England at Narendra Modi Stadium in Ahmedabad. India lost KL Rahul and Virat Kohli early on in the innings as India were reeling at 8 for the loss of 2 wickets.

Coming into bat at No.4, Pant stunned everyone including Jofra Archer by playing a mesmerizing reverse sweep shot for a huge six. The video of Pant launching a shot off Archer’s bowling went viral on social media. However, Pant failed to make his presence count on the pitch as he departed after making 21 off 23 balls. Overall, he hit 2 fours and 1 six. It was Ben Stokes who took the prized wicket of Pant.