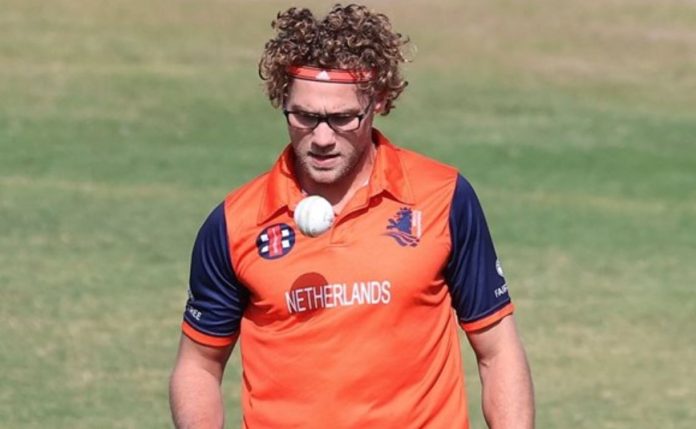 The International Cricket Council (ICC) has been keeping a tab on all cricket-related activities and incidents. If any player crosses his limits by doing something against the rules, he shall pay the price. He is certain to get slapped with a match suspension, year suspension or even a permanent ban from the sport.

Recently, Netherlands’ bowler named Vivian Kingma came under fire for his wrongdoing in the sport. He crossed his limits by altering the condition of the ball, which is called ball-tampering. As a result, the ICC slapped him with a four-match suspension.

The bowler will not be able to play the next four white-ball games (4 ODIs or 4 T20Is) for the Netherlands national cricket team. The fast bowler violated the Level 3 of the International Cricket Council (ICC) Code of Conduct during the game against Afghanistan recently.

The incident took place during the third and final ODI match of the ICC Men’s Cricket World Cup Super League series. The Netherlands locked horns with Afghanistan in the dead rubber in Doha on Tuesday. Earlier, Afghanistan won the first two ODIs in a row.

During the third ODI, Vivian Kingma breached Article 2.14 of the ICC Code of Conduct for Players and Player Support Personnel. Article 2.14 according to the ICC rule books refers to “changing the condition of the ball in breach of clause 41.3 of the ICC Standard Test Match, ODI and T20I Playing Conditions.”

Meanwhile, Afghanistan won the third ODI and won the series by 3-0. After that, ICC released a statement regarding the bowlers’ code of conduct. The ICC wrote: “Apart from the four suspension points that resulted in the sanction.

“Five demerit points have also been added to the disciplinary record of Kingma, for whom it was the first offence in a 24-month period.”