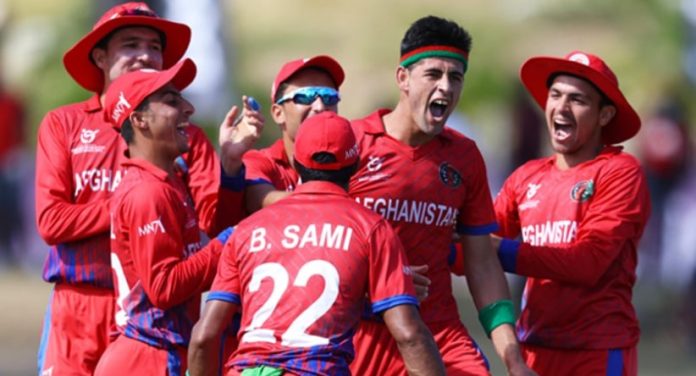 Cricket is an unpredictable game as one can’t decipher what would happen in the next delivery. However, a team is destined to come out on top if they give absolutely everything on the field. Afghanistan and Sri Lanka crossed swords with each other in the fourth quarter-final in ICC U19 World Cup.

Sri Lanka’s young bowlers kept the Afghanistan cricket team in check as they ripped through the defence of the batting order. Vinuja Ranpul troubled the Afghanistan batters with subtle bowling variations of line and length. He registered his best bowling figures of 5/10 during the game.

Afghanistan were stuttering in terms of adding runs to the scoreboard. In the end, they were reduced to 134. After putting up a low-scoring total, they still believed in themselves and tripled their efforts on the field. They were sharp on the field and moreover, the bowlers stuck to their groundwork.

Afghanistan beat Sri Lanka by 4 runs and reach the semis

Despite setting up a low total on the board, the Afghanistan bowlers took the Sri Lankan batters by surprise. All the players rallied together and conducted a raid on Sri Lankan batters. Bilal Sami took 2 wickets to his name for Afghanistan whereas Naveed Zadran, Noor Ahmad, Izharulhaq Naveed and Nangeyalia Kharote took a wicket each.

There was no stability in the batting unit for Sri Lanka in the run chase. They lost wickets at regular intervals and ended up losing all the key batters. Despite losing players from their arsenal, they still had a chance to get back on track as they had plenty of deliveries left.

Sri Lanka were bowled out for just 130 in 46 overs and lost the game by 4 runs. Noor Ahmad was named the Player of the Match for his impressive bowling performance. He bowled 10 overs where he conceded just 20 runs including 2 maiden overs and also took a wicket to his name.

“It was a well-fought match. I tried to push the runs and help the team to get to a good total and then defend it. (Talk at the halfway stage) The wicket wasn’t good for batting. If we can’t make a good total, even they can’t chase that,” Noor Ahmed said at the post-match presentation.