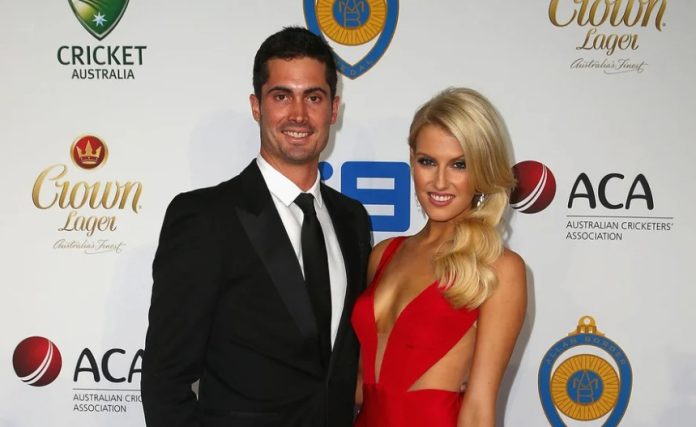 Erin Holland, a former Miss World Australia married her longtime boyfriend and Australian player Ben Cutting at Byron Bay, New South Wales earlier this year. They got married on Valentine’s day, February 14. Since then, both have been a bit busy clicking pictures together.

At times, both have gone out on romantic dates as well. Time and again, cricket presenter Erin Holland has vowed her fans and followers by coming up with adorable pictures on social media. She is currently working as a presenter in the ongoing season of the PSL.

The cricket presenter hogged the limelight after she gave an adorable birthday present to her hubby Ben Cutting on his birthday on January 30, Sunday. This happened during the game between Peshawar Zalmi and Islamabad United at National Stadium, Karachi.

Erin Holland makes her hubby happy by giving him a gift

For the unversed, Australian all-rounder Ben Cutting is currently plying his trade for Peshawar Zalmi in the ongoing seventh season of the Pakistan Super League. Islamabad United were the better side as they won the game by 9 wickets.

Batting first, Peshawar Zalmi posted 168/6 in 20 overs. Despite a top and middle-order collapse, Sherfane Rutherford scored an unbeaten 70 off 46 balls with the help of 7 fours and 3 sixes at a strike rate of 152. However, Islamabad United lost just one wicket in the run-chase.