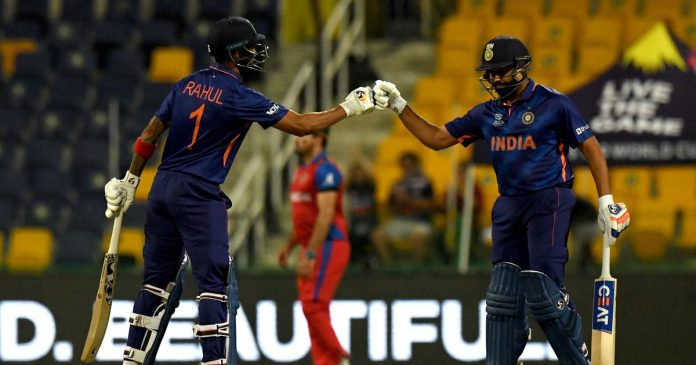 Veteran cricketer Dinesh Karthik has urged head coach Rahul Dravid to nurture a backup opening options of KL Rahul and Rohit Sharma. Rahul and Rohit were superlative once again on Friday, putting up a 117-run stand to set up another win against New Zealand in the 2nd T20I in Ranchi.

Chasing a target of 154 runs, India reached 155 for three in 17.2 overs as Rahul Dravid marked his journey as head coach with a series win. Dinesh Karthik lauded India’s opening pair; however, stated that the management needs to find a backup opener and also give him plenty of game-time.

Speaking on Cricbuzz, he said:

“They have been batting brilliantly for a period of time and both of them are top of the runs in the ICC T20 ratings as well. So I don’t see any reason why they should be disturbed. In fact, I feel one of them should be given a break for the next game”, he further added

Dinesh Karthik, who plays for Kolkata Knight Riders, further laid down a couple of options, who can be tried as the third opener’s choice.

“Are you going to go to a left-hander which could be Ishan Kishan or Shikhar Dhawan, or go to another right-hander, whoever is batting best. It could be Ruturaj Gaikwad, you have Venkatesh Iyer. There are many options when it comes to openers, there’s you know openers’ galore in Indian cricket and Indian Premier League actually”, he said.

“There are a lot of options, so which way are you going to go?” he signed off.

The third and final T20I between India and New Zealand is scheduled to take place on Sunday at the Eden Gardens in Kolkata.