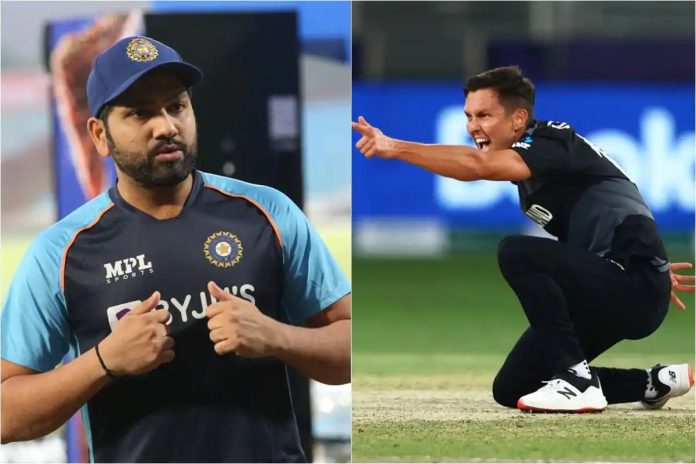 Rohit Sharma made a winning start to his full-time captaincy stint in international cricket with a win over might New Zealand. India defeated the T20 World Cup finalists by five wickets at the Sawai Mansingh Stadium to go 1-0 up in the three-match series.

After the bowlers produced an outstanding job to restrict the Kiwis to 164 runs, India got off to a flying start. Rohit Sharma pressed the gears early on adding 50 runs in just 5 overs before KL Rahul walked off. Rohit looked fluent hitting the bowlers down the ground with ease.

Just when things looked inclined in favour of the home side, Trent Boult pegged back getting the better of Rohit Sharma with his smart tactics. Talking about dismissal, Rohit revealed that Boult implemented a ploy that he has been successfully using for Mumbai Indians.

“We (Boult and I) played a lot of cricket together and he knows my weakness and I know his strength, it’s a good fight between the two,” said Rohit at the post-match presentation.

“When I captain him I always tell him to bluff, and that’s exactly what he did. He put the mid-wicket back and put the fine leg up and I knew he was gonna bowl a bouncer and I was just trying to put it over the fielder but unfortunately there wasn’t much pace on the ball,” Rohit Sharma added.

However, Suryakumar Yadav played a fine inning to take the game deep before Rishabh Pant ensured India go over the line well before the time. Suryakumar played a fine knock of 62 runs before New Zealand staged a comeback in the final few overs. But Indian batters found the boundaries to ease up pressure before Rishabh Pant took home with a hit over the mid on fielder.

With 1-0 up, India and New Zealand lock horns in the 2nd T20I on Friday in Ranchi.