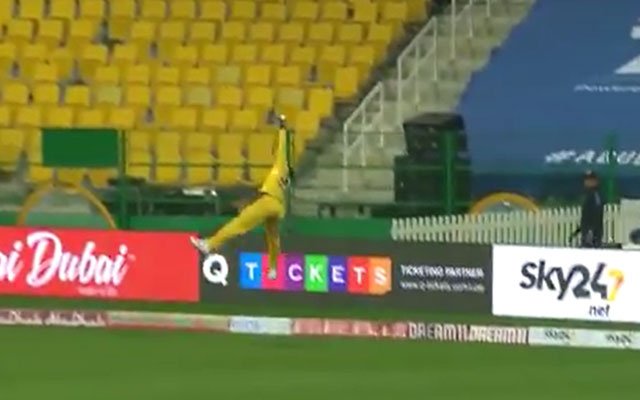 The Abu Dhabi T10 league has already produced sensational moments during the gameplay. How often have we seen batsmen smashing sixes, bowlers taking crucial wickets and fielders taking mind-blowing catches? The truncated version of the game has only 10 overs for each side. With that being the case, batsmen are certain to score runs pretty quickly.

On the contrary, wickets are bound to fall as well. To put it in simple terms, the league is nothing short of entertainment. During the T10 league match between Deccan Gladiators and Team Abu Dhabi, Imran Tahir and Usman Shinwari stunned the cricket universe with their respective fielding efforts on the field.

While Tahir drew praises for taking a marvellous running catch, Shinwari made the headlines for making an acrobatic effort to save a six from sailing over the fence. Netizens took to their respective Twitter handles to praise both the cricketers for their impressive fielding skills. Gladiators’ bowler Tahir proved that age is just a number as the 41-year-old took a running catch to dismiss Afghan cricketer Najibullah Zadran.

Usman Shinwari makes a sensational effort to save a six

On the other end of the spectrum, Team Abu Dhabi’s bowler Usman Shinwari denied Kieron Pollard a six with a breathtaking effort. Kieron Pollard who was batting on 20 faced Naveen-ul-Haq in the last stage of the run-chase. Pollard was determined to finish the game as soon as possible.

The Caribbean whacked the bowler for a six over the long-on region. Meanwhile, Shinwari who was at that position made a superb effort to stop the ball from going over the rope. The commentators were in awe of the superman effort by Shinwari. Pollard couldn’t believe what he saw and had thought that the ball sailed over the fence.

However, as it turned out, he took a single. Batting first, Team Abu Dhabi scored 95/9 in 10 overs. Luke Wright scored 25 off 14 balls while the opposition bowler Zahoor Khan picked 3 wickets. Deccan Gladiators successfully aced the run-chase in 9.4 overs. Cameron Delport stole the show as he scored 40 off 24 balls.

He hit 6 fours and a six to his name. Deccan Gladiators’ captain Kieron Pollard scored 24 off 17 balls including 2 fours and a six. Gladiators won the game by 6 wickets. Zahoor Khan was named the man of the match for his fantastic bowling performance.