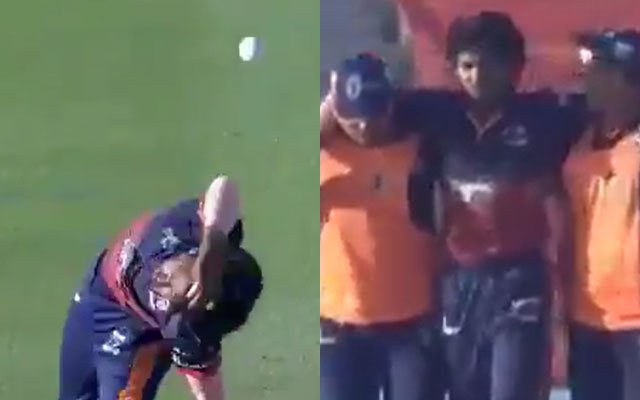 The Abu Dhabi T10 league is continuing to keep the fans at the edge of their seats. The league has witnessed one-sided contests, tight battles and at times, witnessed hilarious incidents on the field. The league had every bit of drama to entertain the fans in many different ways. Recently, the 16th match between Qalandars and Maratha Arabians took place at Sheikh Zayed Stadium in Abu Dhabi.

Qalandars won the toss and invited Maratha Arabians to bat first. Arabians scored 101/5 in 10 overs. Mohammad Hafeez turned out to be the top run-scorer of this innings as he scored 44 off 26 balls including 2 fours and 3 sixes. Sohail Tanvir brought the best out of himself with the ball as he took as many as 3 wickets in his quota of 2 overs where he conceded as many as 22 runs. Tanvir was the best bowler for Qalandars.

Qalandars comfortably chased down the target without any fuss. It took them only 8.1 overs to finish off the task, in what was a one-sided affair. Sharjeel Khan, Ben Dunk, Sohail Akhtar scored 28, 26 and 20 respectively. Afghanistan bowler Yamin Ahmadzai took 2 wickets to his name for Maratha Arabians.

During the game, Sri Lanka’s mystery spinner Kevin Koththigoda made the headlines for his weird style of bowling. Initially, when he bowled to England international Tom Banton, the latter was surprised by his bowling. As the game went on, the bowler got injured after falling twice in T10 league.

The spinner injured himself right after bowling only 1 over. Despite getting injured twice, he still managed to dismiss Tom Banton by affecting a brilliant run-out in the first over itself. The winning captain Sohail Akhtar couldn’t be happier to see his team come through with flying colours with ease.

“I’m very happy. The management believes in me and that’s why we’re performing very well. Tanvir is the most experienced bowler and he’s played all around the world, Danyal is a fantastic fast bowler who has come through the ranks of our talent program, so I’m really proud of this bunch,” Akhtar said at the post-match presentation.