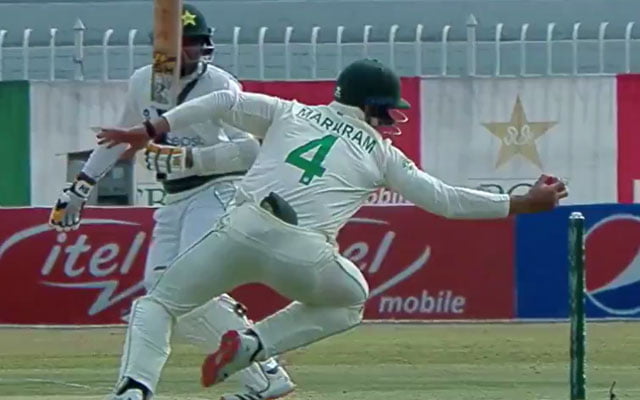 It is not that easy to field, especially in Test cricket because the longest format of the game demands a lot of concentration. A sudden lapse of concentration may put the team in the backfoot. Players with an incredible presence of mind have often helped teams cash in on the chances. A good fielder with a good presence of mind is what every team would love to have in their side.

During the second Test match between Pakistan and South Africa in Rawalpindi, Aiden Markram showcased his fielding potential by taking a gem of a catch at short fine leg to dismiss Abid Ali. On Day 1 of Pakistan’s batting, South African bowlers provided a terrific start to the game. Proteas spinner Keshav Maharaj spun the web and took two wickets by dismissing Azhar Ali and Imran Butt.

When Pakistan lost two quick wickets for 21 runs, they were a tad nervous in scoring runs. Quinton de Kock brought pacer Anrich Nortje into the attack. The pacer did full justice by taking the wicket of Abid Ali. The fast bowler placed a short-pitched ball to Abid Ali and the latter decided to play a shot.

While he played the shot, Aiden Markram who was fielding at short fine leg dived to his right to take a brilliant piece of catch. Abid Ali who hardly looked optimistic with the bat departed after scoring 6 runs off 43 balls. After Pakistan lost 3 wickets early on in the innings, captain Babar Azam and Fawad Alam played really well and took the bowling attack to the cleaners.

Babar Azam scored 77 where he hit 12 fours to his credit whereas Alam scored 45 to his name. Faheem Ashraf was the pick of the batsmen as he scored an unbeaten 78 with the help of 12 boundaries. Eventually, Pakistan were skittled out for 272. Anrich Nortje turned out to be the best bowler for Proteas as he took 5 wickets to his name. Maharaj took 3 wickets while Mulder settled for 1 wicket.