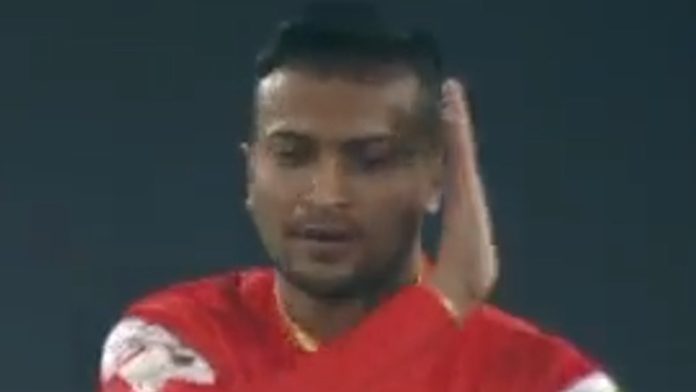 It is no doubt that T20 cricket has brought all kinds of flavours to the table. Cricketers of various countries take part in the T20 league in an attempt to entertain the audience at the best scene. Meanwhile, cricketers are totally in love in Allu Arjun’s dance steps from Pushpa: The Rise movie.

The ongoing edition of the Bangladesh Premier League has seen a few cricketers pulling off sensational dance steps from Pushpa movie. The video clips of them re-creating such dance steps have spread like wildfire on social media portals.

Recently, Bangladesh’s veteran cricketer Shakib Al Hasan celebrated Faf du Plessis’ dismissal with a dance step. The video clip went viral in no time on the internet. The incident happened during the eighth game of the BPL 2022 between Comilla Victorians and Fortune Barishal.

Talking about the game, Fortune Barishal won the toss and opted to bowl first at Shere Bangla National Stadium, Dhaka. Comilla Victorians posted 158/7 in their full quota of 20 overs. Mahmudul Hasan Joy scored at a strike rate of 137.14 as he accumulated 48 off 35 balls including 6 fours and a six.

Karim Janat provided a vital contribution down the order by scoring 29 off 16 balls including 1 four and 3 maximums. Dwayne Bravo was the pick of the bowlers for Fortune Barishal as he took 3 wickets while captain Shakib Al Hasan settled for two wickets.

During the fifth ball of the sixth over, Faf du Plessis tried to play a shot off Shakib. However, that didn’t work out as he was caught by Ziaur Rahman. The former Proteas captain managed to score 6 runs before he was dismissed by Shakib. The Bangladesh cricketer celebrated his dismissal by pulling off a dance step.

However, in the end, Comilla Victorians had the last laugh in the battle. They bundled out Fortune Barishal for a mere 95 and won the game by 63 runs. Nahidul Islam was adjudged the Player of the Match for his 3/5 in his quota of 4 overs.