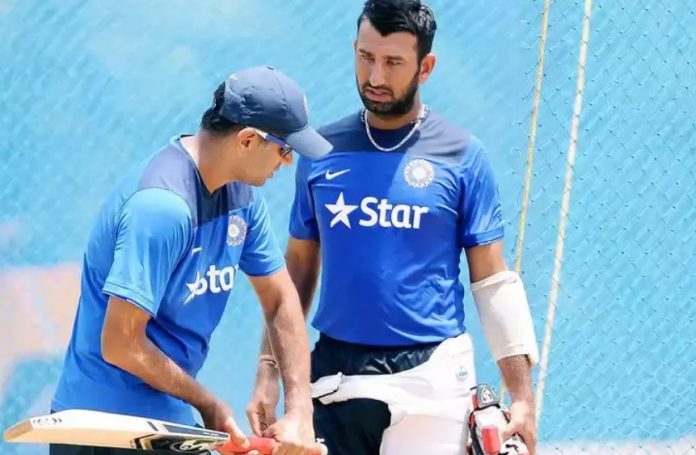 Every cricketer goes through ups and downs in his career. It is not that easy to maintain incredible consistency levels in the long run and a sudden blip is usually expected when a player experiences a heavy burnout. Meanwhile, India‘s Test specialist batsman Cheteshwar Pujara is struggling with his current form in the longest format of the game.

Playing just a solitary format for India, a lot has been expected of him in the passage of play. Although he played many crucial knocks in his career, his current form is what troubling him time and again. Pujara’s woeful form continued after he was dismissed off the very first ball when he walked out to bat in the Boxing Day Test at SupertSport Park in Centurion.

It is to be noted that in the first 38 innings of his Test career, Pujara was never dismissed for a duck. However, since December 2020, he has been dismissed for a duck four times. It is indeed sad to see him in this tough phase. The veteran cricketer has one more chance to redeem himself in the second innings in Centurion.

Rahul Dravid pats Cheteshwar Pujara’s back outside the dressing room

Cheteshwar Pujara walked out to bat at No.3 following the departure of Mayank Agarwal. The right-handed batter scored a beautiful fifty before he was dismissed for 60 runs. Mayank smashed a flurry of nine boundaries before falling prey to Lungi Ngidi. Pujara’s stay at the crease was cut short due to Ngidi’s brilliance.

The lanky pacer bowled an inswinging ball that Pujara failed to combat with the bat. The ball took the inside edge and then lobbed to Keegan Petersen, who was positioned at short leg. With Pujara going through yet another failure, fans came down hard on the batsman on social media.

Meanwhile, India’s head coach Rahul Dravid patted Pujara’s back after the latter’s failure. The video has gone viral. Some fans are hopeful that Pujara would rise from the ashes and deliver the goods in the second innings and that is the only possible option left for the veteran to earn the trust of the selectors.

Meanwhile, Team India are in a comfortable position. They posted 272/3 (90 overs). KL Rahul and Ajinkya Rahane are batting on 122 and 40 respectively.

WATCH: Mohammad Shami consoles Cheteshwar Pujara after cleaning him up with a scorcher in the practice game