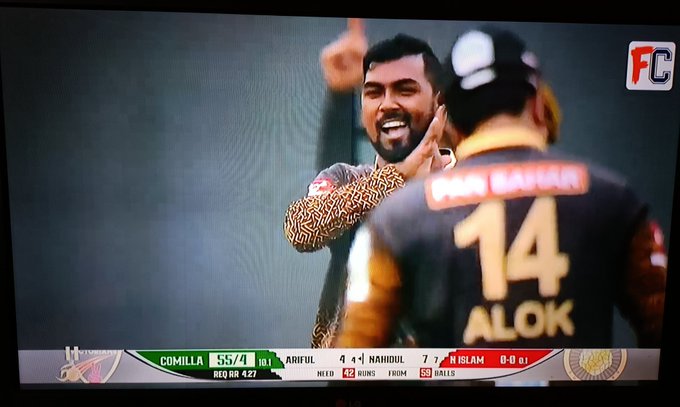 The incident took place in the 15th over of the match when Nazmul scalped the big wicket of Mahmudullah. It was a full delivery drifting into the pads from Nazmul Islam. Mahmudullah tried to sweep it only to find a top-edge and it landed straight to Taskin Ahmed, who was positioned at short fine leg.

Soon after the catch was completed, the camera turned onto the bowler, who was seen replicating the hook steps from the movie ‘Pushpa: The Rise’ starring Allu Arjun to celebrate the wicket.

Speaking about the game, Nazmul Islam starred with the ball returning with 4/18 in four overs to restrict Dhaka to 100 runs before chasing down the total convincingly. Taskin Ahmed and Gazi picked three and two wickets respectively.

Anamul Haque did the bulk of the scoring, knocking 45 runs before Colin Ingram took Sylhet home with three overs to spare and seven wickets in hand.