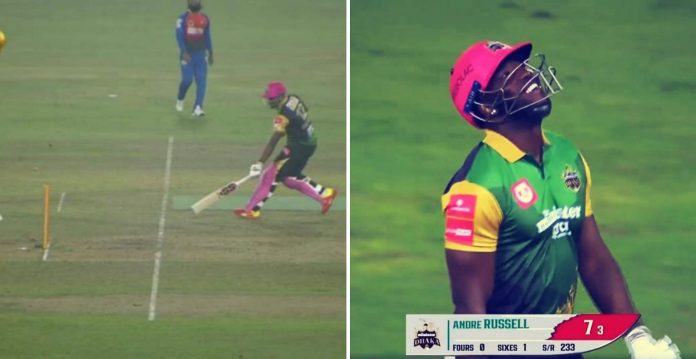 A bewildered Andre Russell was caught short of his crease as he was runout in a bizarre fashion during a BPL game between Minister Group Dhaka’s and Khulna Tigers.

The opening day of BPL 2022 lived up to its expectation with a cracking contest. Russell came out to bat at No.5 and deposited the second ball for a massive six. After announcing his arrival, Andre Russell wanted to sneak in a single tapping a Thisara Perera delivery to the third man.

Mahedi Hasan, positioned at short-third, fired a throw towards the striker’s end, where Mahmudullah was headed. The throw was on target, breaking the stumps but the batter made the crease just in time.

However, things took a turn for the more bizarre: the ball then ricocheted down the pitch and straight on to the stumps at the non-striker’s end where Andre Russell was meandering, expecting that the throw only at the striker’s end. Khulna appealed for both the runouts.

The replays showed while Mahmudullah was safely home, Andre Russell was short of his crease. The fielding team knew it from the beginning and started celebrating only the replays to confirm it.

WHAT A BIZARRE RUN OUT! 😱

According to the Laws of Cricket, the ball was not dead after hitting the first set of stumps, as, as it was in this case. It would only be dead when the batter was dismissed. The first part of Law 20 states:

The ball becomes dead when:

(20.1.1.1) it is finally settled in the hands of the wicketkeeper or of the bowler

(20.1.1.3) a batter is dismissed. The ball will be deemed to be dead from the instant of the incident causing the dismissal.

Andre Russell was taken aback by the dismissal and had his hands in his hips and a broad smile before walking back to the dressing room.