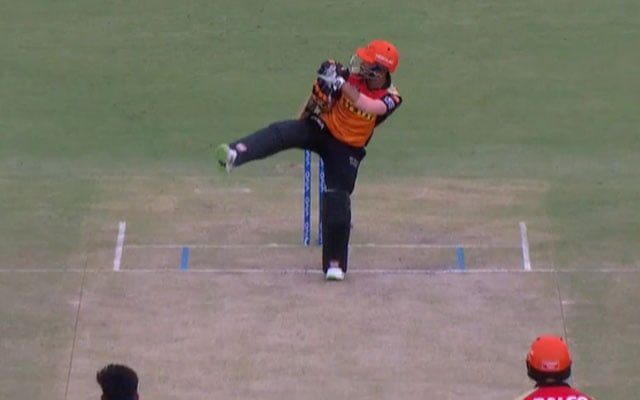 Sunrisers Hyderabad suffered the wrath of their fans after they took a harsh decision to drop David Warner from the team and included Mohammad Nabi during the recently-concluded game against Rajasthan Royals at Arun Jaitley Stadium in Delhi. A day ago, Warner was stripped of SRH captaincy and Kane Williamson was asked to take over SRH captaincy from the Australian international. Talking about the match, Sunrisers Hyderabad captain Kane Williamson won the toss and opted to bowl first.

Rajasthan Royals took the SRH bowling attack to the cleaners and thanks to Jos Buttler for his wonderful century that set the tone in RR’s innings. Buttler scored a quickfire 124 off just 64 balls with the help of 11 boundaries and 8 sixes at a strike rate of 193.75.

RR captain Sanju Samson also played quite well as he scored 48 off 33 balls including 4 fours and 2 sixes. Sandeep Sharma, Rashid Khan and Vijay Shankar picked up a wicket apiece for the Sunrisers. Rajasthan Royals posted a mammoth total of 220/3 in their quota of 20 overs.

Surprisingly, Manish Pandey was promoted to bat as an opener for the Sunrisers. During the run-chase, Manish Pandey stepped out to bat alongside wicketkeeper-batsman Jonny Bairstow. The duo added 57 runs for the opening wicket before Manish was clean bowled by Mustafizur Rahman in the 7th over.

Manish top-scored with 31 off 20 balls including 3 fours and 2 sixes at a strike rate of 155. However, during his stay at the crease, Manish stunned the cricket world by playing a unique shot behind the wicketkeeper. During the fifth ball of the first over bowled by Kartik Tyagi, Manish Pandey executed an innovative shot, in what appeared similar to an uppercut shot.

Sunrisers tried hard to chase down the target but eventually, they could score only 165/8 in 20 overs. Mustafizur Rahman and Chris Morris took 3 wickets apiece for the Royals. Jos Buttler was named the player of the match for his remarkable century.