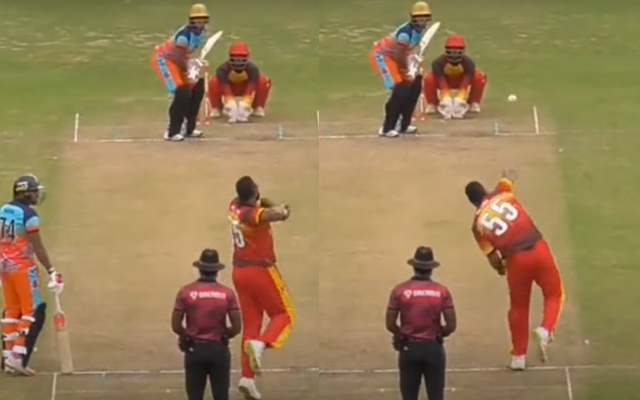 West Indies captain Kieron Pollard is one of the most impactful players when it comes to the shortest format. He is currently plying trade in the ongoing Trinidad T10 Blast.

The veteran all-rounder is known to don many hats be it a batsman, a medium-pace bowler, a fielder or a captain. But on Monday, Kieron Pollard unleashed a completely new version of himself, bowling gentle off-breaks.

The move paid dividends immediately as he provided a breakthrough. The incident took place in a game between Scarlet Ibis Scorchers and Soca King at Brian Lara Stadium in Trinidad. The Soca King got off to a blazing start, reaching the 50-run mark within no time.

Kieron Pollard came into the bowl in the fourth over of the match. It pitched on the good length and batsman Leonardo Julien looked to work the ball towards the on-side on the penultimate delivery of that over and missed it completely as the ball went right through the gates to knock over the stumps.

. @KieronPollard55 proves he can be lethal, even while bowling off-spin! 😱

Kieron Pollard ended with figures of 1/10 in the only over he bowled. However, the breakthrough didn’t result in putting a brake to free flow of runs. Kings registered a mammoth total of 150/3 in their allotted quota of 10 overs.

In reply, chasing a revised target, Kieron Pollard failed with the bat getting out scoring only eight runs. Opener Nicholas Sookdeosingh scored a quickfire 53 runs off 26 deliveries but Scarlet Ibis Scorchers were restricted to 80/3 from their eight overs as Soca King secured a clinical victory by 42 runs courtesy D/L Method.