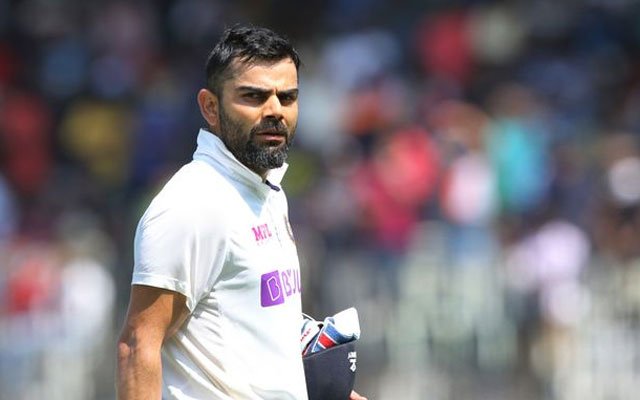 Indian captain Virat Kohli has played an important role in the second innings by adding a vital partnership with Ravichandran Ashwin for the seventh wicket. When India were stuttering at 106/6, Kohli and Ashwin took the game away from the visitors by adding 96-run stand. The crucial partnership helped the hosts stretch a massive lead.

Kohli departed after scoring 62 runs with the help of 7 fours. It’s been more than 400 days since Kohli scored a century in international cricket. He will be looking forward to ending his century drought in the ongoing Test series. Ravichandran Ashwin went about his business and scored his 5th Test century. Earlier, he bagged his 29th fifer in Test cricket.

In the first innings of England’s batting, Virat Kohli took his teammates by surprise as he threw his helmet up and onto the pitch. In the process, the lid bounced along with the middle of the pitch right after landing on the surface. Meanwhile, the 32-year-old captain’s reaction hinted he was trying to throw his helmet to Rishabh Pant.

Since the wicketkeeper didn’t catch it in the first place, Kohli was not at all satisfied with the gloveman. As it happened, the helmet then dropped, wide on the pitch initially before ricochetting across it. But Pant couldn’t catch it at first because his path to catching the helmet was obstructed by other Indian fielders.

But this isn’t the first instance that a fielder triggered a controversy owing to the action on the wicket. Australia’s best batsman Steve Smith came under fire for scuffing the crease during Australia’s Test series loss to Team India, with some fans seeing this incident as familiar.

Section 41.12 of the ICC’s World Test Championship playing conditions deal with a “Fielder damaging the pitch”. Clause 41.12.1 states: “It is unfair to cause deliberate or avoidable damage to the pitch. A fielder will be deemed to be causing avoidable damage if either umpire considers that his presence on the pitch is without reasonable cause.”

As there is no clarity if the helmet landing on the pitch tampered with the surface, Kohli was actually not on the pitch in the first place. However, he was almost trying to throw his helmet at the gloveman, it apparently seems unlikely that the Indian captain will get into trouble.