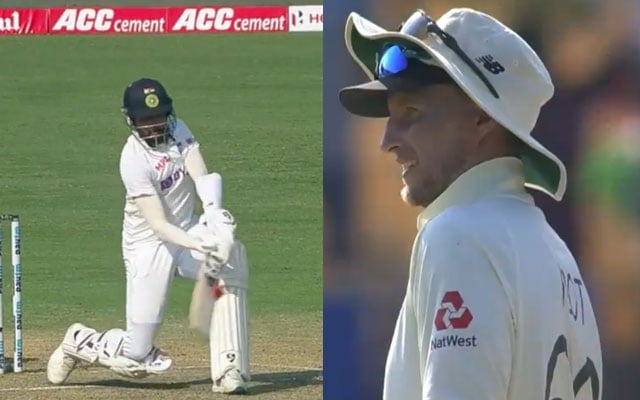 Team India managed to score 329 in the first innings with the help of Rohit Sharma’s 161, Ajinkya Rahane’s 67 and Rishabh Pant’s unbeaten 58*. In reply, Ravichandran Ashwin shattered England’s batting line-up by taking his 29th five-wicket haul. The visitors were restricted to a low-scoring total of 134 in the first innings.

In reply, Indian openers stepped out to bat with a big lead for 195 runs. However, England’s left-arm spinner Jack Leach ensured to insert pressure on the Indian batsmen from the word go. He got rid of Shubman Gill early on. Even on Day 3, Leach continued to weave the magic with the ball as he got rid of Rohit Sharma.

Rohit who finished Day 2 with 25, managed to add just 1 run on Day 3 as he was stumped by Ben Foakes. After Rohit’s departure, Pujara was dismissed in an unlucky manner as he was run out by joint efforts of Ollie Pope and Ben Foakes. Leach once again provided a breakthrough by dismissing India’s wicketkeeper-batsman Rishabh Pant.

England all-rounder Moeen Ali who took 4 wickets in the 1st innings dismissed Ajinkya Rahane and Axar Patel. However, Ravichandran Ashwin and Indian captain Virat Kohli took the game away from the visitors. The duo added a crucial 96-run stand to put the hosts in a strong position.

Indian captain Virat Kohli was en route to scoring a century to end his century drought. However, he was dismissed LBW off Moeen Ali’s bowling. While India kept losing wickets at one end, Ravichandran Ashwin continued to support the team by scoring runs. He went on to essay his fifth Test hundred with the help of 14 fours and a six.

Just before Ashwin scored his century, England’s left-arm spinner Jack Leach removed Ishant Sharma as India lost 9 wickets. When Mohammed Siraj came out to bat, Ashwin showed a lot of faith in him by rotating the strike to him at times. Siraj, in return, played quite safely as he defended the balls really well.

After Ashwin brought up his century, Siraj was seen celebrating the partner’s century. During the 3rd ball of the 85th over, Ravi Ashwin took a single off Jack Leach’s bowling which brought Siraj on strike. At that time, Ravi Ashwin told Siraj: “I’m showing faith in you.. I’ve taken the single and you got to live up to it.” However, Siraj decided to have a go at Leach by smashing a gigantic six.