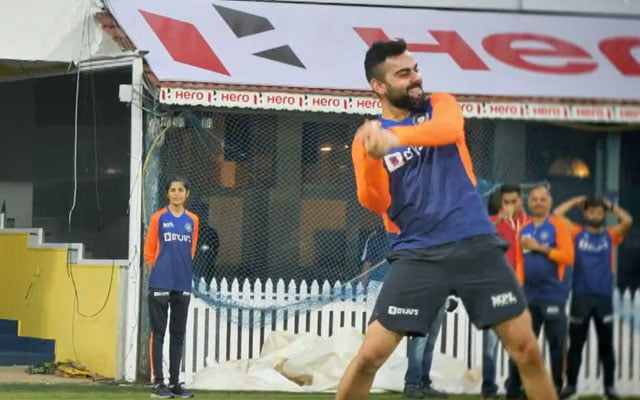 India captain in all three formats of the game, Virat Kohli has finally returned with the team as he came back to India from their Australia tour for the birth of his first child with his wife Anushka Sharma. He had last played in the first Test of the four-match Test series at the Adelaide Oval. While they lost the first one, the visitors bounced back well. The third Test ended in a draw whereas the Team India won the fourth and final one as well.

However, Team India are ready to host England in a full-fledged series which will begin with the four-match Test series, starting from February 5, 2021, in Chennai. After coming out negative in their COVID-19 Tests, the team have started practising at The Chepauk to prepare for the first Test.

And, on Tuesday, the official Twitter account of the Board of Control for Cricket in India (BCCI) has shared a video of the team members’ practising in Chennai that went viral in no time. While fans loved the video, the captain took the limelight away from others. In the video, he could be seen getting back in the zone and having a fun time the teammates warming up and playing football as well. However, there was one thing that was special in the video which got the attention of every fan as well.

About the 27 seconds of the video, Virat Kohli could be seen shadow-practising ‘Helicopter Shot‘, which is considered as one of the iconic shots popularised by none other than the former captain of Indian team – Mahendra Singh Dhoni. That reminded everyone of the veteran wicket-keeper batsman, who is also considered as the best finishers and captains as well.

However, Twitterati reacted on Kohli’s gesture and many refer to him as one of the biggest fans of ‘Mahi’. Here are the reactions from Twitter users:

With New Zealand making it to the final, India and England will fight for the second spot. For India to reach the finals of the World Test Championship (WTC), they need to win at least two Tests among the four matches and also win the series against England whereas England will have to win by 3-0, 3-1 or 4-0 as well to face New Zealand in the final of WTC at Lord’s.