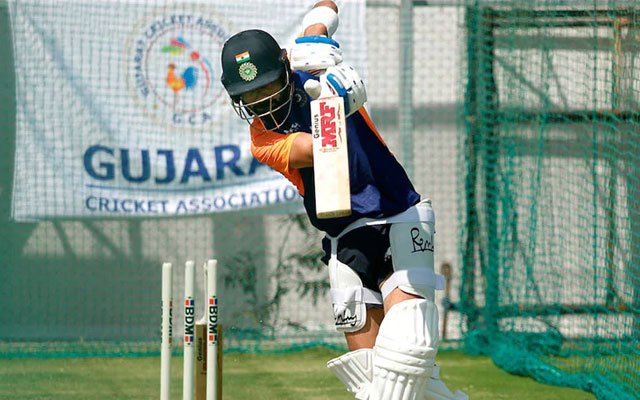 Indian captain Virat Kohli is an aggressive character on the cricket field. He is someone who displays his emotions as he reacts to each and every cricketing activity during the passage of play. Incidents of Kohli using swear words at the opposition players are many. However, he is completely a different cricketer off the field.

The 32-year-old captain loves to have a great deal of fun with his teammates. This is how he spends quality time off the field apart from a hectic session at the nets. Recently, he gave a priceless expression when Rishabh Pant operated a spidey drone camera closed to him in the nets session ahead of the third Test match against England in Ahmedabad.

Virat Kohli who is one of the consistent cricketers in the world is also the only batsman to maintain a batting average of 50+ across formats. However, it’s really been a long time since he scored a century. In fact, it’s been more than 450 days since he scored his century. Nonetheless, he will be looking forward to ending the century drought soon in the home series against England.

The skipper scored 72 and 62 in the first and second Test match against England in Chennai. Ahead of the pink-ball Test, Kohli had some great time having fun with his players in the nets. Not a long ago, Kohli imitated MS Dhoni’s helicopter shot in action and the video clip went viral on social media platforms.

Now, once again, he tried to imitate his rivals and former cricketers. In one video, Kohli could be seen emulating Steve Smith while practising batting. In one video, he could be seen imitating Steve Smith while practising batting. He behaved in a silly way for fun in the nets after playing a shot, which is something that Australia’s best batsman does that quite often.

After imitating Steve Smith, Kohli decided to do something else. In another video clip, the Indian captain was seen bowling in the practice session. However, as it happened, it appeared that Kohli was actually imitating former South African legendary cricketer Jacques Kallis. Both the videos are doing the rounds on the internet.