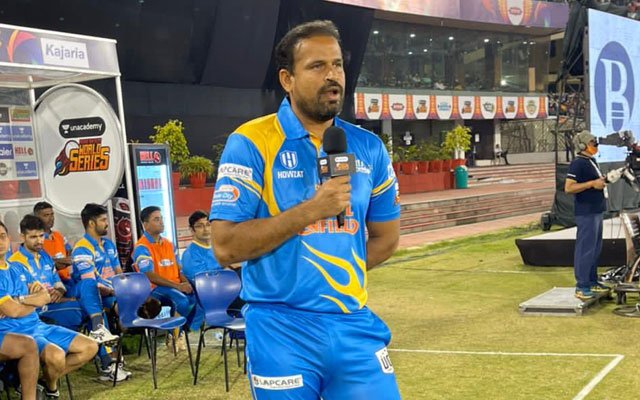 The 2020-21 Road Safety World Series that is being played in Raipur featuring India Legends, England Legends, Bangladesh Legends, Sri Lanka Legends, West Indies Legends and South Africa Legends has garnered many eyeballs as the cricket fans, through this tournament, have got a chance to watch their favourite players in action again.

During one match that was played between India Legends and South Africa Legends on March 13, a very funny umpiring decision was recorded. Arguably, it was one of the worst decisions ever seen off late. The fact that it was not an international game helped umpire Sanjay Hazare’s cause as he was not brought under scrutiny.

The incident happened on the last ball of the 15th over when Yusuf Pathan was bowling to Zander de Bruyn. Pathan hit the pads of the right-hand batsman and appealed for an LBW. Just like every bowler, Pathan took a chance, knowing that the ball was hitting well outside the leg stump. But to his surprise, Hazare raised his hand and signalled out.

The fans and commentators were shocked by the decision of Hazare, who was a former cricketer himself and has already umpired in five ODIs, one T20I and 16 IPL games. It was clearly not his best decision. Maybe such an erroneous call could have prompted the authorities to have DRS for these games going ahead.

Nobody fathomed how the umpire could give that out. Even the bowler Yusuf Pathan was in disbelief that the decision was made in his favour. On a lighter note, the video of Yusuf Pathan, who was not able to control his laughter, went viral after the decision. Pathan tried to hide his face to cover his emotions however the camera got the better of him and captured his reaction. The video started trending.

Thanks to the widespread use of social media, such videos spread like wildfire. When one fan sees the video, he/she simply starts sharing on the different social media platforms. For it would have been a few years back this incident would have happened, umpire Sanjay Hazare would not have been at the receiving end of such embarrassment.