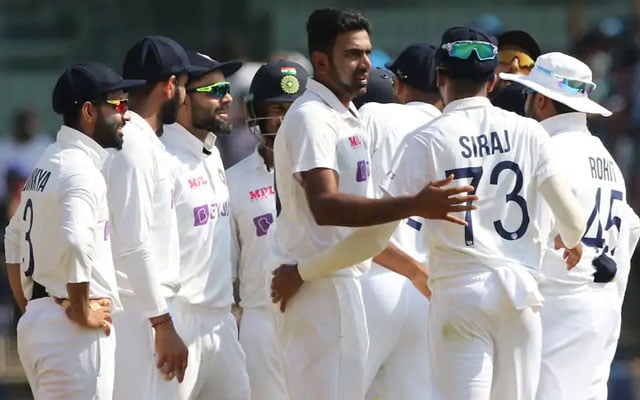 The Chepauk wicket has been the talking point for the past couple of days because the pitch exploded out of nowhere and for no reason. Former cricketers, full-time pundits, experts lashed out at Chepauk pitch and termed it as “poor”. Even former England captain Michael Vaughan termed the pitch as “shocker”.

India won the second Test by 317 runs and levelled the series at 1-1, which is their biggest ever win against England in Test cricket. With this memorable victory, India moved to second place in the World Test Championship points table with 460 points.

Team India are behind Kane Williamson & Co who registered 420 points but they have a better percentage point (i.e. 70%) which is why they are on the top spot. Meanwhile, Team India have 69.7 percentage points. Team India still have a lot of work to be done at home. They should win the series by 2-1 or 3-1 to stand a chance of qualifying for the WTC final.

If India win the ongoing high-profile Test series over England by the aforementioned margin, they will lock horns with New Zealand in the WTC final which is slated to be played at the Lord’s in England in June 2021.

If England managed to get back on track in the series by beating India by 3-1, they can go on top of the table to take on New Zealand at home. Talking about England’s current position, they are ranked fourth with 442 points and 67 percentage points.

What is a ‘Poor’ pitch according to ICC?

Meanwhile, Virat Kohli & Co are in danger of losing the position in the ICC World Test Championship points table if the Chennai pitch is termed ‘poor’. With the pitch assisting the spinners from Day 1 itself, questions were raised on the Chennai pitch. With England getting bundled out for just 134 and 164 in the first and second innings of the second Tes match, there were calls to rate the “poor”.

However, as per International Cricket Council (ICC) rules, “A poor pitch is one that does not even allow an even contest between bat and ball, either by favouring batters too much, and not giving the bowlers (seam and spin) from either side sufficient opportunity to take wickets, or by favouring the bowlers too much (seam or spin), and not giving the batters from either team the opportunity to make runs.”

In the Chennai Test, spinners ruled the show by taking 32 wickets out of 40 wickets. On the other hand, Indian spin bowlers bagged 17 wickets in 2 innings combined. As far as England bowlers are concerned, their spinners took 15 wickets in two innings. In addition, as per the ICC rules: “The pitch offers excessive assistance to spin bowlers, especially early in the match,” the rule states. This is the main reason why the pitch could be rated poor and India could be deducted three points.