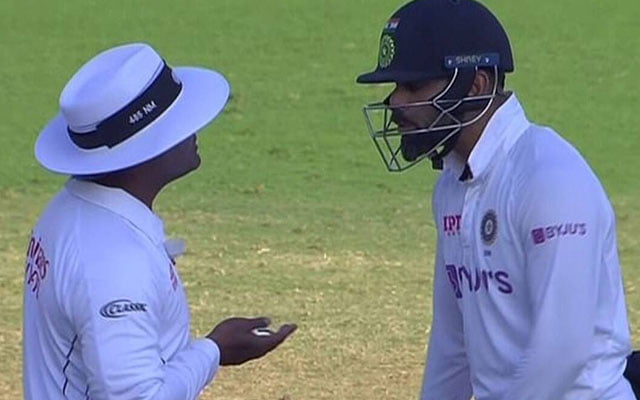 It is cognisance of the fact that Indian captain Virat Kohli is an animated character both on and off the field. He is someone who never hides his emotions during the passage of play. Whenever Indian bowler takes a wicket, Kohli gets super excited and pumped up and that’s how he celebrates the wicket.

At times, emotions get the better of him in heated moments. When a decision goes against Team India, we have seen Virat Kohli getting frustrated by wrong decisions as he walks up to the on-field umpire to argue with him. The same thing had happened during the second Test match between India and England in Chennai.

During the Day 3 of the second Test at MA Chidambaram Stadium, Kohli had an altercation with the on-field umpire after the decision went against India. The heated discussion took place right after India’s DRS review that led to umpire’s call in favour of England captain Joe Root.

During the last over of the third day, Axar Patel bowled a terrific delivery to England captain that saw Root missing the ball completely when he tried to defend it. Axar Patel’s delivery deflected off the captain’s pad and then went into the hands of Indian gloveman Rishabh Pant.

It was when the Indian players appealed in unison before going for a DRS as the on-field umpire Nitin Menon remained standstill. After the decision was sent upstairs, the TV replays on the large screen showed that Joe Root’s bat was no involved but as far as the ball tracking is concerned, the ball was hitting Joe Root’s off stump.

However, the ball’s impact on the pad led to umpire’s call in England’s favour. This decision led to a war of words between Virat Kohli and Nitin Menon. Since Kohli had crossed his limits to have a go at the umpire, he may be in trouble.

Article 2.8 in the ICC’s Code of Conduct states “dissent at an Umpire’s decision”, and includes “arguing or entering into a prolonged discussion with the Umpire about his/her decision”.

Hence, the punishment for such an offence could bring Level 1 or Level 2 charges on the Indian skipper, leading to 1 to 4 demerit points. Virat Kohli already has 2 demerit points and a sum of 4 demerit points within 2 years result in a player being suspended for 1 Test/2 ODIs or T20Is.