India vs England 2021: Washington Sundar and Jonny Bairstow indulge in a war of words 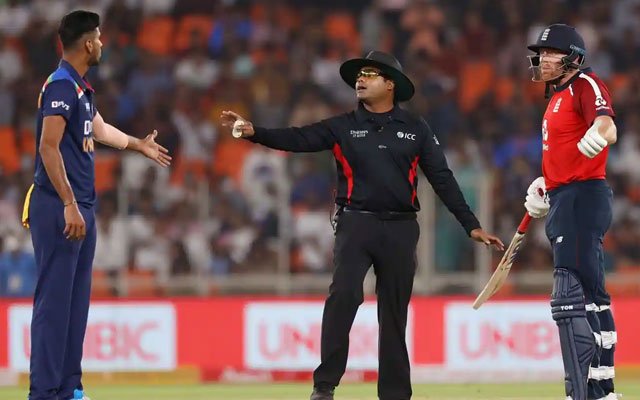 The first T20I between India and England was staged at Narendra Modi Stadium in Ahmedabad. It was never an interesting contest right from the toss. Team India succumbed to England bowlers’ pressure and eventually, they could post just 124/7 in 20 overs. Had it not been for Shreyas Iyer’s resilience, it would have been a different plot.

Shreyas Iyer was the only Indian batsman who accessed the conditions and went about his business. The 26-year-old essayed 67 off 45 balls and his innings was laced with 8 fours and a six at a healthy strike-rate of 139.58. Apart from Iyer, no other player turned up the ante. England’s top pacer Jofra Archer bowled extremely well throughout the game.

The fact that he bowled 1 maiden over just goes to show his bowling prowess. In his quota of 4 overs, he conceded 23 runs at an economy rate of 5.80. Besides that, he took as many as 3 wickets to his name. He dismissed the likes of Lokesh Rahul, Hardik Pandya and Shardul Thakur.

In reply to India’s target, England batsmen got off to a blistering start and it literally seemed like they were playing at their den. Indian bowlers had no clues whatsoever and the damage was already done by Jason Roy and Jos Buttler who added a 72-run stand before the latter was dismissed LBW off Yuzvendra Chahal’s bowling.

After Buttler got dismissed for 28, Washington Sundar took the big wicket of Jason Roy as the latter missed out on scoring a half-century. Playing 32 balls, his innings included 4 fours and 3 sixes.

During the 6th ball of the 14th over bowled by Washington Sundar, Dawid Malan tried to hit the ball but in the end, there was no run. But Sundar was not at all happy with Bairstow who was in the non-striker’s end.

The drama unfolded when Malan chipped the ball to the left of Sundar but Bairstow didn’t move one bit as he turned his back and made it to the crease. This is the reason why Sundar didn’t find himself in a comfortable position to take the catch. The ball went on to hit Bairstow on the helmet while he got back to the crease.