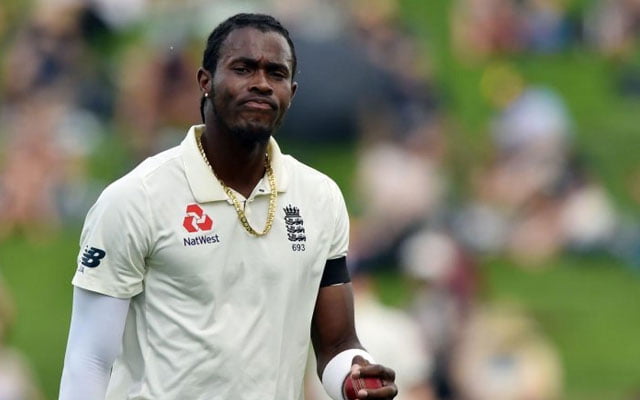 England fast bowler Jofra Archer was one of the decent bowlers for the visitors in the first Test match against India at MA Chidambaram Stadium in Chennai. He took three wickets in the Test opener. The Barbados-born pacer accounted for 2 dismissals to get rid of Indian openers – Rohit Sharma (6) and Shubman Gill (29).

His fantastic bowling spell gave England a much-needed lift in the first innings. The pacer didn’t really showcase his mettle on the field in the second innings although he settled for just one wicket. The fast bowler got rid of Jasprit Bumrah as India were bowled out for 192 in their run-chase of 420.

England took a 1-0 lead in the four-match series after beating India by 227 runs. Meanwhile, both teams are seriously preparing for the second Test match which is scheduled to be played in the same venue on February 13, Saturday. The second Test will have 50% crowd in the stadium.

In what comes as a big blow to the England cricket team, Jofra Archer has been ruled out of the second Test match owing to elbow pain. The 25-year-old pacer felt uncomfortable with his right elbow. He even got an injection after the first Test match.

England and Wales Cricket Board confirmed the news on Thursday via press release. “Jofra Archer will miss England Men’s second Test against India in Chennai starting on Saturday after having an injection in his right elbow. The injection follows discomfort the fast bowler experienced during the 227-run win in the first Test at the same venue,” ECB said in a release.

Meanwhile, the England Cricket Board further conceded that Jofra Archer’s injury concern is not linked or related to any earlier injury. The Barbados-born fast bowler is likely to recover soon so that he can play the third Test match in Ahmedabad.

On the other hand, India have no chance other than turning it around. They need to win 2 games in the next three in order to book a ticket to the Lord’s to play the ICC World Test Championship final against New Zealand in June later this year.