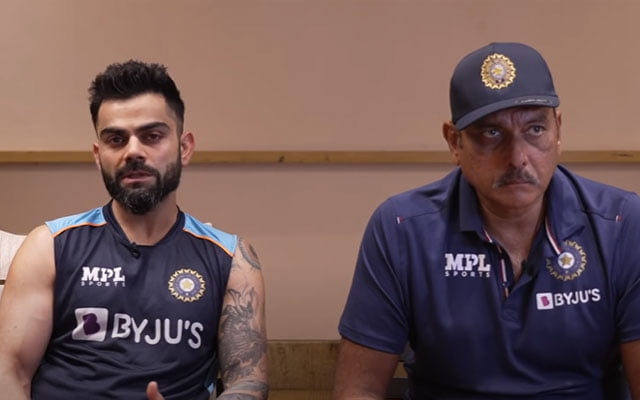 The 14th edition of the Indian Premier League has already been postponed indefinitely by the BCCI after multiple coronavirus cases were reported inside the bio bubble. Meanwhile, cricket fans can’t wait to witness the spectacle between India and New Zealand at The Ageas Bowl in Southampton on June 18.

Virat Kohli & Co is all geared up for the high-voltage clash against Kane Williamson & Co in the inaugural edition of the ICC WTC final. The Indians already departed to the United Kingdom on June 2. Just before their departure, captain Virat Kohli and coach Ravi Shastri turned up for a virtual press conference.

Both of them addressed the reporters in the pre-departure press conference where they answered questions asked by the journalists. Meanwhile, one specific incident caught the attention of the presser. Meanwhile, Kohli and Shastri didn’t know that they were already at the live press conference.

The head coach and captain were actively discussing their game plan in a bid to outsmart New Zealand. In no time, the audio clip of the same discussion spread like wildfire among fans and they started guessing about Team India’s bowling combination for the marquee clash.

According to the leaked audio clip In the audio, Indian captain Virat Kohli can be heard speaking- ‘hum inko round the wicket dalwayenge, Left handers hai inpe, Lala Siraj sabko start se hi laga denge.” (Translation: We should bowl round the wicket since New Zealand have left-handers. We will put Shami and Siraj at the first of the innings). In response, Ravi Shastri said: “hmm”.

Virat Kohli, at the press conference, stated that they worked beyond the bounds of possibility for finals. “We have worked hard for finals and nobody can take that away from us! There was no doubt we were gonna be featuring in the WTC Final.