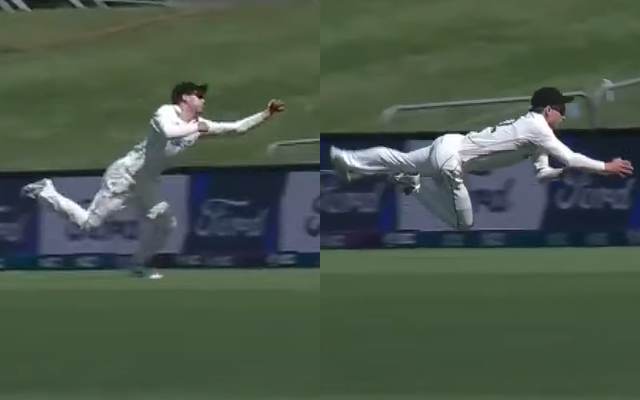 New Zealand cricketer Will Young took the cricket fraternity by surprise after he took a sensational one-handed catch near boundary ropes to dismiss Marco Jansen during the second and final Test match against South Africa in Christchurch.

The incident happened during Day 4 of the second Test when Marco Jansen tried to flick the ball off Colin de Grandhomme towards the leg side. At first sight, the ball clearly looked like it was travelling all the way for a boundary at full speed.

However, Will Young sprinted in the quickest way possible only to stretch his left hand in such a way that he would grab it tightly. In the process, he pulled off a one-handed catch, which might be one of the greatest catches in Test cricket.

Will Young takes a stunner to get rid of Marco Jansen

New Zealand players were literally taken aback by Will Young’s breathtaking fielding effort. Marco Jansen couldn’t believe his eyes as he thought he struck the ball very well. However, Will Young had other ideas as he took a catch in one hand.

Will Young with one of the greatest catches ever in Test cricket!!! Watch live Day 4 coverage on @sparknzsport now!!! #NZvSA pic.twitter.com/7hCbraWkX1

South Africa might have lost the Test opener but they made a stellar comeback in the second and final Test match. Proteas won the second Test by a massive margin of 198 runs. The series came to a close with both teams winning a game each.

South Africa posted 364 in the first innings, thanks to Sarl Erwee’s 108. On the other hand, Neil Wagner was the pick of the bowlers for Kiwis as he took 4 wickets. In reply, New Zealand were bowled out for 293. Colin de Grandhomme scored 120 to his name. On the contrary, Rabada took a five-wicket haul.

Proteas declared the innings at 354/9. Kyle Verreynne scored an unbeaten 136. Southee, Matt Henry, Wagner and Jamieson took 2 wickets each. New Zealand failed to chase down the target as they were bowled out for 227, losing the game by 198 runs.

Devon Conway top-scored for New Zealand with 92. On the other hand, Kagiso Rabada, Marco Jansen and Keshav Maharaj took 3 wickets each. Rabada was named the man of the match for taking 5/60 and 3/46 in the first and second innings.