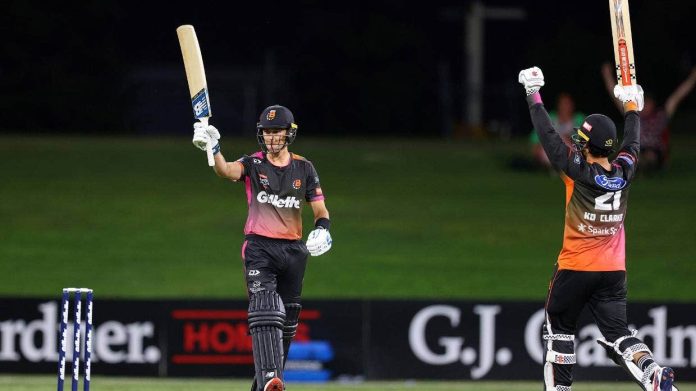 Trent Boult pulled off a trick from his bag with the bat to help Northern Knights pull off one of the most magnificent win against Canterbury in the ongoing Super Smash.

Chasing 108 runs, Knights were cruising towards victory as they were placed at 72/3 in 12.2 overs. Just when it looked like the Northern Knight will walk away with the game with ease, Canterbury made a swift comeback. They had the Knights 100/8 in 19.2 overs which brought Trent Boult out in the middle.

Trent Boult took a single on the very first ball he faced. With the equation down to six runs needed off the last ball, the Kiwi pacer produced a clean hit over the mid-wicket region to take his side home. It was a good length delivery and Boult cleared his front leg to have an almighty heave. Once he connected, the ball was headed for only one result and landed miles above the ropes.

The Canterbury teammates was shocked to see the results as they jumped off their seats to celebrate the win. The New Zealand pace himself was happy to see the outcome of the shot.

Meanwhile, batting first, Canterbury had posted only 107 runs after a stellar show from the Northern Knight bowlers. Joe Walker was the pick of the bowlers, scalping 3/13 while Trent Boult, Ish Sodhi, and Anurag Verma picked up two wickets each.

With this win, Northern Knight have leapfrogged Central Districts to go to the top of the points table. They now have 14 points under their belt from 5 games, two points ahead of Central Districts, who have played a match less.