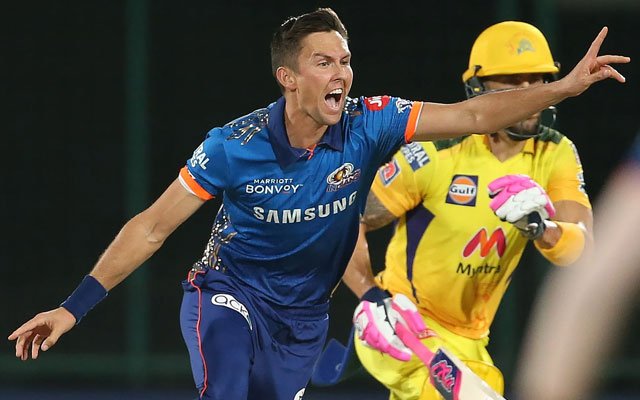 The defending champions Mumbai Indians are taking on Chennai Super Kings in the ongoing edition of the Indian Premier League. The match is currently being played at Arun Jaitley Stadium in Delhi. CSK are in scintillating form this season with 5 straight wins.

They started their campaign with a defeat over Rishabh Pant-led Delhi Capitals. After that, CSK were an incredible force in the season as they went on to beat the likes of Punjab Kings, Rajasthan Royals, Kolkata Knight Riders, Royal Challengers Bangalore and Sunrisers Hyderabad.

Trent Boult loses his cool on his teammate Krunal Pandya

MI all-rounder Krunal Pandya came under fire for conceding a boundary off Trent Boult’s bowling. Boult suddenly lost his temper as he yelled in frustration because it could have been a single but Krunal’s lazy fielding effort turned into a boundary. The video doing the rounds on social media shows Boult losing his cool on his teammate.

Usually, Krunal Pandya is the one who abuses his teammates for lazy fielding effort but this time around, he was on the receiving end. The incident happened during the fifth ball of the 6th over when England all-rounder Moeen Ali smashed the ball towards the leg side off Kiwi seamer Boult’s bowling.

Meanwhile, Krunal Pandya saw the ball and failed to stop the ball in the first place. He fumbled an easy ball for a boundary and thus Boult fumed in anger at his teammate. The video is doing the rounds on social media channels. Meanwhile, Chennai Super Kings posted their highest ever total against Mumbai Indians in the Indian Premier League.

Ambati Rayudu top-scored with 72 off 27 balls at an imperious strike rate of 266.67. Moeen Ali and Faf du Plessis also played really well. England all-rounder scored 58 off 36 balls whereas Faf du Plessis chipped in with 50 off 28 balls.