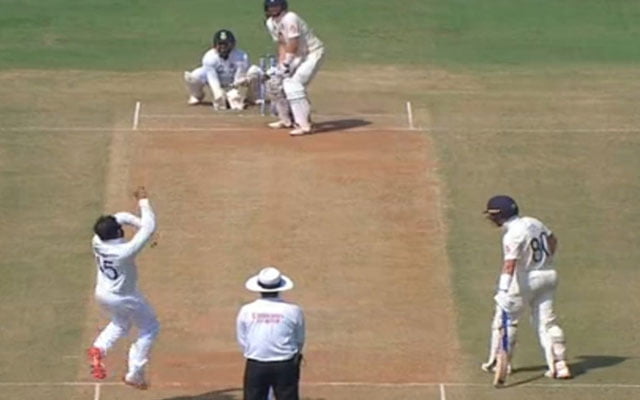 Rohit Sharma became the subject of discussion during the first Test match against England at Chepauk Stadium in Chennai. He made the headlines for two reasons. He dropped an easy catch to gift Dom Bess a life and on the other hand, he emulated Harbhajan Singh’s bowling style during the game. Overall, it was a terrible day at the office for the Indians as England well and truly dominated the gameplay.

The Indians manage to account for three dismissals on opening day. Joe Root and Dominic Sibley frustrated the Indian bowlers by adding 200-run partnership. Bumrah took his first Test wicket in India by getting rid of Daniel Lawrence for a duck. The right-handed batsman was dismissed leg before wicket. Root notched up his 20th Test century in his 100th Test match.

Dominic Sibley scored an imperious 87 with the help of 12 fours. However, at the fag end of the overs on Day 1, Bumrah bowled a brilliant delivery to deceive Sibley as the latter was dismissed leg before wicket. As a result, England managed to score 258/3. Jasprit Bumrah was the pick of the Indian bowling unit as he took 2 wickets while Ravichandran Ashwin took a wicket.

On Day 2, the English batsmen grew from strength to strength. Joe Root scored his fifth Test double century and became the first batsman to achieve the milestone in his 100th Test. England all-rounder Ben Stokes provided a great tempo by scoring 82 runs. The southpaw smashed as many as 10 fours and 3 sixes.

Meanwhile, Kohli brought Rohit into the attack. Surprisingly, he was in a different avatar. The 33-year-old stalwart stunned the cricket fraternity by copying Harbhajan’s action where he bowled to England captain Joe Root. He delivered a full toss and Root nudged it down the ground.

Meanwhile, fans took notice of this and posted the video on social media platforms. The video spread like wildfire. Indian captain Virat Kohli tried his best to rotate the bowlers as the team were searching for desperate breakthroughs. However, they failed to confront the English batsmen.