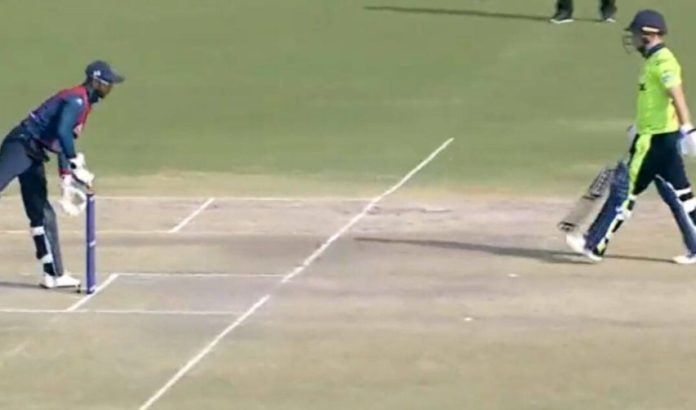 Cricket is a gentleman’s game without the shadow of any doubt. Players who represent their nations are absolutely making sure that the game is played in the right way. The cricket fraternity has witnessed several moments that uplifted the spirit of the game.

The game between Nepal and Ireland witnessed one such moment that grabbed eyeballs. Nepal wicketkeeper Aasif Sheikh drew plaudits from every nook and corner of the cricket fraternity for exhibiting a spectacular gesture after he refused to run out Ireland batter.

The incident happened during the third ball of the penultimate over of Ireland’s innings off Kamal Singh’s delivery. Meanwhile, the Nepal wicketkeeper had all the time to run out Andy Mcbrine as the latter was way short of his crease.

Well, what made the wicketkeeper hesitate? Let’s learn more about the incident. The drama unfolded when Ireland’s Mark Adair attempted to play a big shot but ended up missing it. As it happened, Adair sensed an opportunity for a single as he even called for a quick run.

Meanwhile, his partner, Andy McBrine who was at the non-striker’s end fell on the pitch after colliding with the bowler. In fact, Andy was a long way away from reaching crease when Kamal Singh threw the ball at Nepal’s wicketkeeper. However, wicketkeeper Aasif decided not to run the batsman out.

Drop a ‘♥️’ below to show your appreciation for this golden gesture!

Aasif Sheikh won the hearts of the fans for his great gesture and the video clip of the same has gone viral on the internet. Meanwhile, McBrine scored 11 runs. Ireland were bundled out for 127 runs in 20 overs. George Dockrell top-scored with 28 for the Ireland team.

Dipendra Singh Airee was the wrecker-in-chief for Nepal as he returned bowling figures of 4/21. In reply, Nepal could only come up with 111/9 in 20 overs. Dipendra Singh Airee was the top scorer for Nepal as he scored 28 runs whereas others failed to contribute. Mark Adair, Simi Singh, Andy McBrine and Barry McCarthy took 2 wickets each for Ireland.